THE CAROLOREGIANS: From The Congo Square b/w You Got To Be A Man (Vinyl 7″) 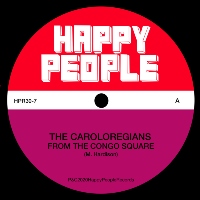 Funky boss reggae outfit, The Caroloregians, might now be defunct but before the year is out, you’ll have a chance to cop a new 45 as Happy People Records commit their favourite two cuts off the band’s 2012 LP, Fat Is Back, to vinyl 7″ – namely From The Congo Square and You Got To Be A Man. For those not in the know, the Caroloregians stock-in-trade was very much the sort of ‘dirty reggae’ still delivered by The Aggrolites – though why the former band was better known on the mod and soul scenes and the latter has always been better known on the punk scene, with little crossover awareness (despite members of both bands having worked together on other similar projects) is bizarre. But we digress, on this double-A-sider, You Got To Be A Man very much exemplifies the funky reggae sound of ’69 that the PR describes as ‘The Meters-meets-The Upsetters’ along with gritty soul vocals of Matt Hardison. The flip, From The Congo Square, is a slightly different kettle of fish however – a faster skanking, somewhat less retro affair distinctive in its dissimilarity to the rest of The Caroloregians ouevre and driven by a more modern sounding rhythm that will nonetheless light a fire under dancing feet.
(Out 1 December on Happy People Records)

Posted on 3rd October 2020 no comments