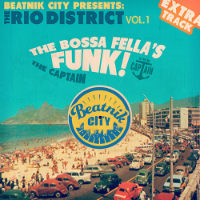 Turns out that the Beatnik City Records crew got so excited about their debut release of Brazilian sixties-edits, The Rio District Vol. 1, that they lost one of the tracks for the release during all the celebratory grooving and shaking. The Captain‘s Bossa Fella’s Funk (for this is the missing track) is essentially a bossa beat remix of Fatboy Slim’s Rockafeller Skank which famously sampled the Just Brothers’ Sliced Tomatoes. Alright, so this strains the central conceit of using sixties source material somewhat (Sliced Tomatoes dropped in ’72 and Rockafeller Skank in ’97) but I can’t imagine any still feet in the house when this one drops. Player below for an exclusive first listen on monkeyboxing.com and the free DL follows shortly, apparently. Caipirinhas all round!

Posted on 14th September 2014 no comments