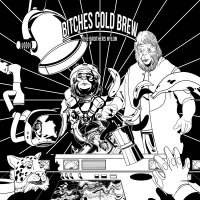 Welcome to the weird world of The Brothers Nylon which finds the NYC-based Rufolo Brothers belching (sometimes literally) whatever whimsical notion takes their vocal fancy over funky drums and bass and into a vintage tape machine. Obviously, that’s not weird enough for them, so they then send it through the ether to library music fiend and multi-instrumentalist Shawn Lee, currently residing in London, who apparently needs no encouragement whatsoever to get his freak on. The result is Bitches Cold Brew – a Captain Beefheart-esque take on funk and pysch.

So you won’t be surprised to learn that this includes such delights as a spacey jam entitled Local Fruit & Veg Emporium, a vaguely spaghetti-western-ish psych rock number called Selfie Stick and a seven-minute epic psych-soul wigout entitled All Man Milk on which listeners are repeatedly encouraged to drink some of the singer’s ‘man milk’. Now there’s an offer. Good for the skin too, apparently. There’s also room for a number of other surreal food and drink-based eulogies, a tribute to the ‘mother of dragons’ in the form of opener Khaleesi and the funky Frisco disco ode to the Bay Area of Shove It In My Mouth. All of which might lead you to believe it’s slightly more out there than 2013’s self-titled debut. And you’d be absolutely correct. One for those in need of a full musical quirk-out then.