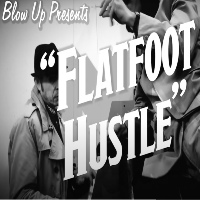 Ahead of The Bongolian’s sixth studio album, Harlem Hipshake, comes the video for LP track Flatfoot Hustle the first evidence of the Latin-percussive delights to be found on the forthcoming thirteen-tracker. Funky and densely layered, the track is drenched in horns, wah-wah guitar and bongos (naturally) and spotlights the Bongolian’s love for NYC’s sixties Latin soul scene and the work of Ray Barretto and Mongo Santamaria. Caught on camera for the video you may detect the man himself, Nasser Bouzida and partner in crime (not to mention Bongolian live band guitarist and Big Boss Man compadre) Trevor Harding who proceed to spend the ensuing three minutes and forty-seven seconds in glorious retro black and white, swapping hats more often than corrupt cops take bribes, playing a xylophone and not so privately eyeing the camera. Harlem Hipshake follows on 13 November.

Posted on 3rd October 2020 no comments