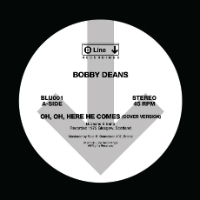 Now then – this is the sort of thing that gives you the shivers – in a good way. A bit like the horns on the opening of the A-side. It goes like this: turntable legend and former UK DMC champion Paul Smith a.k.a. Krash Slaughta goes on one of his regular crate-digging trips in Glasgow and happens across a 1972 LP by one Bobby Deans on a label called THOR and is stunned when he checks it out to find it contains a righteously funky uptempo version of Herbie Hancock’s Oh! Oh! Here He Comes along with another cut, Elephants Graveyard, which he cannot help but rework in a blistering b-boy breaks style. Aware of the label but puzzled at his lack of knowledge about the LP, Smith has a chat with the seller. It transpires that the record may never have had an official release. Also aware that THOR is a Glaswegian label, Smith makes like Sherlock and discovers that The Bobby Deans big band is still playing at a local Glasgow pub every week! One thing leads to another, Smith hooks up with Bobby Deans himself and manages to sort out a seven inch release with B-Line Recordings containing Oh! Oh! Here He Comes on the A-side and his remix of Elephants Graveyard on the flip. Cruelly, the news never reaches Deans who Smith discovers has sadly died earlier on the very morning in February this year on which he visits to relay the good tidings. Which practically makes it your duty to buy a copy and play loud in memory of Mr Deans.

Competition closed after being open for less than half an hour! Congratulations ‘Ade’!

QUESTION: What was the name of Krash Slaughta’s track on the 2008 Wack Records 7″ that also featured S.M.O.V.?