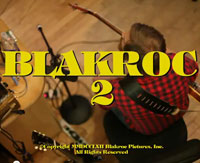 More ‘Keys n emcees on the horizon then. The Black Keys are legends and so are the rappers they worked with on their first rap/ rock project Blakroc so it’s a pity that what they came up with was a bit of an ‘also ran.’ Still, Carney and Auerbach and friends are back soon for a second crack of the whip with Blakroc 2 – so who knows – maybe things will get rectified. When I heard the music the ‘Keys had recorded for the original project I just kept thinking that what would’ve been better was if producers had just chopped and sampled already existing Black Keys tracks for the various MCs to rip over. In my head, that’s what Blakroc 2 will be. The fact that the teaser video below is sound-tracked with the closer from the debut Black Keys album The Big Come Up (i.e 240 Years Before Your Time – i.e. an original Black Keys track) is just encouraging my fantasy really and I’m going to indulge until it is realised. Or destroyed.

Substantial hard facts about the project are currently as elusive as Colonel Gaddafi but as the vid reveals the project will once more be overseen by one Mr Damon Dash and feature the following: Talib Kweli, U God, Jay Electronica, OC, Curren$y, Wiz Khalifa, Jim Jones, Sean Price and the The Cool Kids. Here’s hoping…Props to my Tucson hip-hop connect and very fresh emcee Savant for the heads-up on this.

Posted on 3rd September 2011 no comments