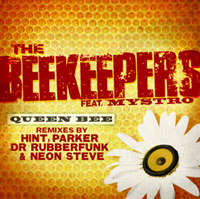 Queen Bee is the latest single from the recently released Beekeepers LP Apiculture and a bit of a banger. Musically coming off like a collision of The Freestylers and The Heavy, it finds rapper Mystro exploring the growing distance between him and the missus (“Oh I should have put a ring on it?/ Well, you’re lucky if I even put a fake bit of bling on it”) and one of the album’s highlights. I was going to continue the monkeyboxing embargo on bee-related gags (not because I’m above such cheap journalistic tactics in principle you understand, more because record label Jalapeno came down with a nasty case of bee-pun diarrhoea when they signed the group and they’ve still got the mad runs) but it’s hard to refer to this many remixes and versions on a single as anything other than a swarm. Parker’s own dubstep mix is the very thing if you’re that way inclined and its’ all about the funky drum breaks on Dr Rubberfunk’s version. Check remixes below vid. ‘Ave it!
(Out 13 June on Jalapeno)

Queen Bee by The Beekeepers

PRESS RELEASE
Bristol duo The Beekeepers ramp up the pressure with the release of Queen Bee – a killer collaboration with UK rapper Mystro that’s got the whole place buuzzziiinnnggg !!

The deep, moody and epic nature of their Ascending Change EP earned them the number one spot on DMC’s ZZub Chart and lead to much head nodding approval from their peers. From Bristol – check. Respectful of “The Bristol Sound” – check. Heavy dub vibes – check. Well just before you compartmentalise the Beekeepers you need to check this.

In its original form Queen Bee is a killer slice of up tempo party hip hop. It’s then hustled into a Back to 91 Tardis by Hint (who’d a thought he was a ruffneck raver at heart). Jalapeno stalwart Dr Rubberfunk drops some B-Boy badness in his mix using a funky as hell fuzz guitar riff while Beekeeper Parker turns in a dubstep mix under his day-job moniker. Finally Canadian Breakbeat hotshot Neon Steve turns in a heavy roller for the breaks crew. Sorted.

Mystro is one of the most exciting talents in UK hip-hop crossing over to a whole army of new fans with his Round My way single at the end of 2010. He has taken time out from recording his debut album “Mystrogen” to drop two tracks on The Beekeepers album and has just been confirmed to perform with the Beekeepers at their Glastonbury show.