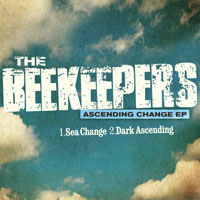 Apiculture album preview and audio HERE
Bristol duo Parker and Boca 45 follow up last year’s banging Bee Funk EP with the rather different Ascending Change EP. Where the former led with an in-your-face party-starting vocal cut and drew in elements of everything from dubstep to funk, this is all about the epic, moody, instrumental atmospherics and the big sweeping sound vistas that you might more traditionally have come to expect from Bristol’s beat-mongers. That said, expect production flourishes – especially rhythm-wise – that nod to influences like dubstep and wouldn’t have been around in the time when Massive Attack made stuff that didn’t put you straight to sleep. According to the press release a full album – Apiculture – is on the way and some big vocal cuts are being saved for future single releases. Full press guff and some shocking bee-related gags below player.

Ascending Change by The Beekeepers

(PRESS RELEASE) OK let’s get it straight. Under no circumstances will there be any gags whereby we tell you that there is a big buzz about this band. Nor will there be any honey references when we talk about the music. Their recording studio will not be described as a hive of activity and we won’t have them dressed up in silly outfits for the press photos. Well OK maybe the press photos bit is untrue (it was too tempting) but no buzz gags. Promise. So that aside what do you need to know?

Well here’s the basics. The Beekeepers are two Bristol producers (Boca 45 & Parker) working with a collective of singers and musicians to deliver an album of lush orchestration, dark dub, tight beats and killer songs. Their music is true to the tradition of their hometown and occasionally referencing those influences but always looking to move the game forward.

Having released the club oriented Bee Funk EP to considerable applause in 2010 the boys went back to the studio to craft their debut LP Apiculture. Ascending Change EP showcases the orchestral and leftfield side of the album leaving the vocal tracks to be singles further down the line. For these two records they worked with acclaimed composer Ben Salisbury to create dark and dubby textures with beautifully uplifting strings resulting in the soul stirring ambience of these killer instrumental tracks.

Posted on 24th February 2011 no comments