THE BAMBOOS: Power Without Greed + video 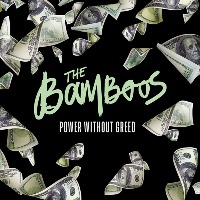 New Bamboos single Power Without Greed follows Hard Up and While You Sleep and taps into the classic funk trope of the protest song. Cue a loping seventies groove (complete with flute solo), over which the unmistakable tones of Kylie Auldist soar as she regales anyone who will listen that what we need is power without greed. The accompanying video delivers a montage of the effects of said greed with a particular focus on environmental devastation and may well call to mind the old Cree prophecy, “Only when the last tree has been cut down etc…will we realize we cannot eat money.” Obviously we can’t expect morally bankrupt politicians and hedge fund managers to give a flying shit about all that – they’ve been ignoring the signs for as long as the monkey can remember. But as that ecological disaster chicken races home to roost with alarming acceleration, it’s heartening to think that, if a message derided as ‘beard and sandals’ thinking three decades ago can now be disseminated across the airwaves via an eminently listenable funky groove, we might be close to achieving a critical mass of people able to force a sea change on multiple fronts.  Hooray for The Bamboos!
(Out now on Pacific Theatre)