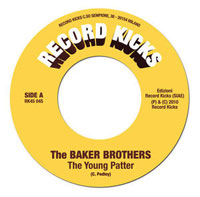 The Baker Brothers keep it smooth and jazzy with this new 45 from Record Kicks. Well, I say ‘keep it,’ I can’t see them doing it any other way really. These tracks are so smooth and jazzy that were you to turn your back even for a second whilst your 45 was on the turntable by the time you turned back you’d find your 45 adapters wearing miniature berets, your headshell sporting a effete goatee and your amp calmly sipping a tiny cup of espresso and simultaneously exhaling a cloud of blue smoke at you in a pitying manner. No mean feat for electronic equipment you’ll agree.
(Out 28 February 2011)
THE BAKER BROTHERS – The Young Patter by Record Kicks
THE BAKER BROTHERS – Patience by Record Kicks
(PRESS RELEASE) ‘Funk titans The Baker Brothers return with a brand new 45 on RK’

Southern UK boys The BAKER BROTHERS are back at it with a brand new double-sider 45. On side A they provide an infectious instrumental jazz-funk/jazz-dance number with “The Young Patter”, a horn-driven funky floor-filler complete with breakbeat and super catchy bassline you can’t help but respond to. On B, the group revisit Rokk’s mega rare and impossible to find 1976 modern soul single “Patience”, which Keb Darge claims is one of his favorite records and which was included in the recent “California Soul” compilation on Ubiquity.

The Baker Bros landed at RK late in 2010 with top notch 45 “Once I Had A Friend”, judged to be among the best singles of 2010 according to iTunes UK and also included in the compilation “SoulShaker Vol.7”. The band however already had almost 10 years worth of prior experience under its belt, including 6 albums, 2 live DVDs and numerous singles. Having paid their dues and earned the respect of such names as Jazzman Gerald (Jazzman Records), Brother ?uestlove (The Roots / Okayplayer), Mark Lamarr (BBC 2), Dr. Bob Jones (Future Soul) and more, the band is now ready to push it to the next level and repeat the magic of their previous single with these two new tracks of soulful finesse available on 45 and Digital Download. A definite must-have!

Posted on 13th February 2011 no comments