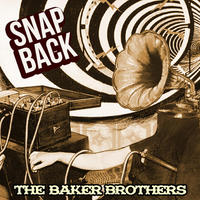 Funk-jazzbos The Baker Brothers drop Snap Back off their Time To Testify album and as I’ve been a bit busy recently I passed it over to the monkeyboxing staff for some soundbites. Monkeyboxing taxi driver ‘Jazzy’ Dave thought it was, “a superb evocation of funk’s golden era of the early nineties – Incognito, Brand New Heavies and all that. Tip top,” while MB’s bike courier/BMX bandit (and confirmed dubstep/ghetto funk aficionado) Robbie felt that, “the guy in the hat dances like a jazz fag.” Not that he’s one to talk. Tea lady (and very funky woman) Loretta May Drew has been unavailable for comment since L.A. funk legend Johnny Otis (r.i.p) passed away on Tuesday but was due in today before I posted this. And then the news about Etta James (r.i.p) came through and we still haven’t heard from her… The five track EP also features a remix and an edit of another LP track Feeding Freddie.
(Out now on Record Kicks)