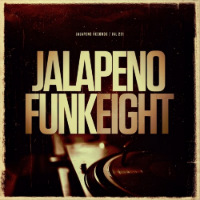 The moveable feast (previous volumes have surfaced variously anywhere between December and May) that is Jalapeno Records’ Jalapeno Funk Vol. 8 is out today and who better to produce a 55-minute mix of the bombs thereon than The Allergies? Exactly – no-one. The Allergies it is then. Do they appear on it? I should coco! Their massive Since You’ve Been Gone (is that an Althea Spencer sample? Boom!) is the standout cut on a twenty-track deep collection that also features the huge lead single, You Could’ve Been A Lady, from the mighty Smoove & Turrell’s current album Crown Posada plus another Crown Posada cut, No Point In Trying, plus John Turrell on Featurecast cut Ain’t My Style, and Smoove booty Nowhere To Go. Lest that lead you to suspect a certain narrowness of selection – fear not! Also present are Izo Fitzroy, Skeewiff, Ephemerals, Soopasoul, Alexia Coley, Quasamodo, Parker, Kraak & Smaak, Myles Sanko, Flevans and Basement Freaks – several of whom are also present more than once. Players below!
(Out today on Jalapeno Records)

Posted on 16th December 2016 no comments