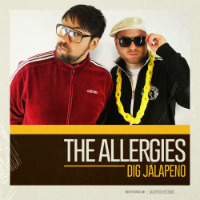 Everybody knows deejay-producers love nothing better than getting the keys to a record company’s back catalogue so one can only imagine the pants-wetting excitement Bristol duo The Allergies must have experienced when they recently gained access to Jalapeno’s vaults. Of course, having penetrated the inner sanctum, there was nothing left to do but have had a right old rummage. The result is The Allergies Dig Jalapeno – a seventeen-track dancefloor-primed compilation that mixes up hip-hop, breakbeat, disco and soul from Jalapeno Records roughly two-decade existence, including two never-before-heard exclusives from the boys themselves. One of these is the uptempo big beat soul of You Got Power while the other is premiered right here – an alternative (and in the monkey’s opinion, superior) – mix of recent Andy Cooper-featuring cut Blast Off from their Push On album. Put it this way – it’s the closest thing you’ve had to a new Ugly Duckling track this side of the last UD LP back in 2011.

Other highlights on this first in what promises to be a …Dig Jalapeno series include Kraak & Smaak’s own remix of their disco-breakin Money In The Bag from ’03, the funky dancefloor hip-hop of Boca 45’s We’re Right Here from ’13, Radio Trip’s hectic big beat instro Computer Singing from ’09, and a brace of neo-northern soul bangers – Smoove & Turrell’s Hard Work and The Allergies’ very own Entitled To That. Check that good stuff below.
(Out 20 October on Jalapeno Records)