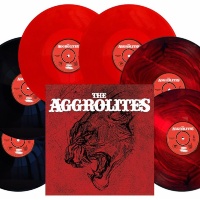 Cheering news if you’re an Aggrolites fan, even better if you’re a vinyl fan too and positively fantastic news if you’ve never got your hands on albums two, three, four and five from the band. That’ll be their self-titled second LP then, along with Reggae Hit L.A., IV and Rugged Road. If you don’t know what all the fuss is about, you clearly aren’t aware of The Aggrolites who have been peddling their own brand of ‘dirty reggae’ (broadly encompassing the sub-genres of funky reggae and boss reggae) since the early noughties. Despite massive similarities in sound to the sadly defunct Caroloregians (both bands’ outputs tap into the twin legacies of Alton Ellis and Derrick Morgan from the late sixties and early seventies and both bands’ singers possess a bona fide soul voice), The Caroloregians ended up adopted by mods and broader-minded funk and soul fans while The Aggrolites remain beloved on the punk scene. This is a rare opportunity for those who’ve previously missed out to check the chops of the band (which evolved from a project to create a live backing band for Derrick Morgan himself, no less!) whose core has always been singer and guitarist Jesse Wagner and retro keyboard legend, Roger Rivas. Get a taste of their back catalogue below and most definitely do not sleep!
(Out now on Pirates Press Records)

Posted on 27th November 2020 no comments