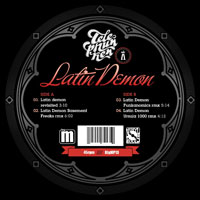 Alright, so this has been out for a bit – I figured if I went on holiday for two weeks in the middle of August it’d be a slow news fortnight as far as music was concerned but I return to an inbox busier than Gaddafi’s ‘inner compound’. One assumes the phrase ‘Latin Demon’ was intended to convey an olive-skinned Mr Lover Lover type rather than some leathery-winged denizen of hell obsessed with the difference between the dative and the locative in a dead language (“What’s this, then? “Romanes eunt domus”?”) as Telephunken has a crack at the fertile latin breaks genre. Indeed, it’s a wonder the ghetto-funking Spaniard hasn’t had a stab at it earlier (although technically he did as this is the ‘revisit’) as he does rather well with this poppy slice of ghetto-latin-funk that avails itself of ‘Mexican’ brass, castanets and acoustic guitar vamps and stays just the right side of ‘breakbeat Gypsy Kings territory’. Remixes come courtesy of heavyweight friends Basement Freaks, Funkanomics and Ursula1000.
(Out now on BigM)

(PRESS RELEASE)
It’s Teeeeleeeephuuunken time! BigM Productions proudly presents the summer vinyl to have! This single is sheer latin breaks floor power madness. With Basement Freaks, Funkanomics and Ursula 1000 as remixers in the boat, you’d be stupid not to save yourself a physical copy of this floor bombing gem on wax.

A01) Telephunken – Latin Demon
Close your eyes, get into this unbelieveable authentic groove and beam yourself under the hot and bright sun of spain. Solid breaks on a huge soulful theme ending in pure beauty.

A02) Telephunken – Latin Demon (Basement Freaks Remix)
In their remix Basement Freaks inject a touch more breakbeat power to push the tune more into the banging peak time at late night. Rock it!

B01) Telephunken – Latin Demon (Funkanomics Remix)
It’s a Funkanomics rewind! You can’t miss this characteristic style no one else has. Added to this strong theme, we have another bomb in the bag. Watch yourself!

B02) Telephunken – Latin Demon (Ursula 1000 Remix)
For this tune it’s defo a must to have a rework by the coolest groover from NY. Here you go, Ursula 1000 with intelligent late night coolness!