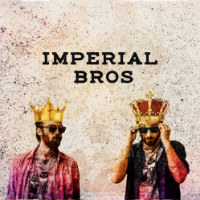 ‘Smashing the stage’ with ‘vibration’, here, in the form of new single, Imperial Bros, are real-life brothers Theo and Greg Tantanozis a.k.a. Tarzan Bros. Turns out it’s the first cut taken from forthcoming long player Apartheid Of Thoughts and the track, after a lengthy instro. intro. finds one of the boys relating an anecdote, involving the ‘one or two time’ that ‘rastaman stop…[him]…and…[he]…didn’t know what dem say.’ The mind boogles at the potency of a patois that someone who sings in patois can’t fully understand though, happily, it does seem that the key themes of the conversations in question (herbs and quality music, funnily enough) were nevertheless successfully communicated. No doubt it’s the sort of positive outcome that is always greatly assisted by fanfare-like horns and a dubby groove that nattily bumps along such as Imperial Bros. But don’t take my word for it – ‘Jah say so’ too.
(Out 28 September HERE)

Posted on 28th September 2017 no comments