THE AMNESIACS: Top Yourself/ Want Your Body – 2009 – Single review 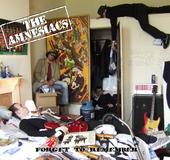 With Top Yourself (soon to be featured in upcoming Brit Football-hoolie flick Awaydays) The Amnesiacs musically shove The Ordinary Boys to the ground and snatch ska from their limp hold. Then they riotously sprint away, pausing only to give Will And The People a well-deserved shoeing, before returning the genre to pubs full of shouty pissed-up men. Want Your Body is somewhat more mellow, at least initially, and sounds a bit like irie Californian surf-ska-punks Slightly Stoopid might – if they’d lived all their lives in Toxteth rather than San Diego and whose favourite pastime was going down the local instead of getting fucked up on the chronic. Rough, ready and rude. Oi!