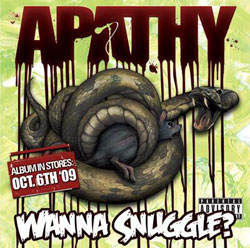 What a shame there wasn’t a nice old-fashioned interfering record company around to trim the fat off Wanna Snuggle’s twenty-odd track length into the lean mean fourteen track hip-hop machine that I created on iTunes. Still, that’s what it’s all about these days isn’t it? The digital age has brought the power to the people. Apathy no longer needs a record company (this is self-released) and I have the power of an executive producer. On the other hand – while Ap might not be paying a middle man you can bet that somebody somewhere will have posted this up for free download until the mp3 police catch up with them. Number of copies downloaded? Who knows? Money received by Apathy? Zero. Then there are chumps like me who (call us old-fashioned) still want to play stuff on vinyl – like album promo single and total banger Shoot First which features B-Real, harks back to the glory days of early Cypress Hill and was released for free download a while back. Apparently not even Apathy knows if there will be a vinyl release. Consequence? I go and press up a dubplate. Cost to me? Ironically, about the price of an album. Money received by Apathy? Zero (at least directly) which is technically piracy but then it ain’t for sharing or resale and when I play it on the wheels of steel I’m arguably generating publicity for Apathy. And just like there isn’t a 12” of that track available; there wasn’t an executive producer around which means a review of Wanna Snuggle takes all the tracks into consideration. Which is why this is getting four stars and not the five that my infinitely superior fourteen-track edit would have done.
As is de rigeur these days, there are more collaborations on this than solo tracks. Admittedly, the best of these rank among the best hip-hop released this year, the aforementioned Shoot First for example, the Blacastan-featuring boom-bap of On And Off The Mic and especially the two cuts on which Holly Brook features. The first of these, No Sad Tomorrow, has a chorus which sounds like it’s based around an old sixties folk/ psychedelic rock sample and if there was any justice would already have trounced any hip-hop currently in the charts. On the other hand, the second, Victim, is the last thing you’d expect to find in the charts and is quite possibly the creepiest hip-hop track I’ve heard in a while with a vocal hook from Brook that is all the more chilling for sounding so mournfully innocent. Little Brother’s Phonte (who seems to have taken over from Busta Rhymes as ‘guest-spot slag’) once again sounds better on True Love than on any actual Little Brother release, and King Magnetic does a decent turn on the Amil sampling Anyday
Production is solid and there’s a range of musical avenues explored on here – including heavier funk-backed boom-bap tracks although the predominant sound is big band strings and horns which mainly works well though not always. J-Live vehicle This Is The Formula is just tedious, for example. Also, Apathy might want to make a mental note not to try and sing (as he does on Hell’s Angel) where he sounds like a dead ringer for Awol One. In fact, he even sounds like Awol One when he’s rapping on that one.
Translated into old money: there’s easily an album’s worth of worthwhile (and occasionally classic) stuff on this album but there’s also an EP’s worth of stuff that should’ve been (and would’ve been back in the day) relegated to an outtakes and b-sides collection.

Heads up! Demigodz founder member Apathy’s back with solo LP number two (Read review of Apathy – Wanna Snuggle HERE) and it sounds pretty damn good…head on over to abovegroundmagazine.com for a free download of second single and album highlight Shoot First (feat. B-Real and Celph-Titled
(PRESS RELEASE) Wanna Snuggle (released 6 October 2009 on Demigodz Records) features appearance from B Real, Phonte, Celph Titled, Holly Brook (Fort Minor), J-Live, Chip-Fu, Ryu, Blue Raspberry (Wu-Tang), and production from Mike Shinoda.
Even after signing a major label deal with Atlantic Records, to being named one of Urb Magazine’s “Hot 100” artists, being featured in XXL, Vibe, XLR8R, Remix, CMJ, Pound and numerous other publications and joining frequent partner in rhyme (Celph Titled) in forming Demigodz Records, Apathy has spent the better part of his journey as an artist searching for “absolute truth” within his music and within himself.
Though the name implies lethargy, Apathy’s work-ethic has been anything but. Many know him as a founding member of The Demigodz crew (which also includes Styles Of Beyond, Celph Titled and 7L & Esoteric) where he joined the rest of his crew in releasing 2002’s critically acclaimed EP, The Godz Must Be Crazy, (the same EP that led to a major-label bidding war for his services that eventually resulted in Apathy signing with Atlantic Records). Furthermore, Apathy has has also made guest appearances on LP’s from Linkin Park’s Mike Shinoda (Fort Minor LP), Sage Francis, Styles Of Beyond, Jedi Mind Tricks, Outerspace and Army of Pharaohs among others. In addition to having his music appear on the hit TV series CSI: Miami, you can also hear his voice on the video game Midnight Club 3: Dub Edition (which featured his track “Drive It Like I Stole It”), Ap has also released a series of highly circulated mixtapes; including 2003’ It’s The Bootleg Muthafuckas! Vol.1, 2004’s ironically entitled Where’s Your Album; which was highlighted by his reworking of Depeche Mode’s “Personal Jesus” and The White Stripes “Seven Nation Army” (“It Takes A Seven Nation Army To Hold Us Back”) and 2007’s Baptism By Fire
Apathy’s debut, Eastern Philosophy, was released in 2006 by Babygrande Records and received rave reviews from Vibe Magazine and a slew of prominent publications and he was highlighted as one of the top upcoming emcees by XXL Magazine with a “Show And Prove” selection.
Though its been three years since Apathy’s debut, he has remained busy flexing his production muscle, working with artists like Cypress Hill, EDO . G, Styles Of Beyond and 7L & Esoteric. Yet, Apathy plans to re-stake his claim by taking Hip-Hop by storm again with his long-awaited sophomore LP, Wanna Snuggle, which completely smashes any notion of a sophomore jinx and delivers another timeless rap LP.
Some of the highlights from Wanna Snuggle include the buzz singles that have driven the Internet wild, the uptempo Mike Shinoda produced “Shoot First”, featuring the legendary B-Real (of Cypress Hill) and Celph Titled and the Phonte assisted “True Love.” Also contributing a major influence on Wanna Snuggle is singer Holly Brook, best known for Fort Minor ‘s chart topping single “Where’d You Go.”
Apathy – Wanna Snuggle: Tracklist & credits
1.) Hell’s Angel
2.) Money Orientated f/Emilio Lopez
3.) Gov’t Cheese
4.) On and Off The Mic f/Blacastan
5.) Back In L.A. f/Ryu and Veze Skante
6.) Shoot First f/B-Real of Cypress Hill and Celph Titled
7.) I’m A Demigod
8.) True Love f/Phonte of Little Brother
9.) Mind Ya Business f/Chip-Fu)
10.) Thinkin’
11.) This Is The Formula f/J-Live
12.) Guys & Girls f/Blue Raspberry
13.) Anyday f/King Magnetic
14.) Candy f/Dose
15.) Run, Run Away
16.) No Sad Tomorrow f/Holly Brook and Mike Mass
17.) Rhode Island f/Emilio Lopez
18.) What Goes Up
19.) Hard Times On Planet Earth
20.) Slave f/Motive
21.) Victim f/Holly Brook