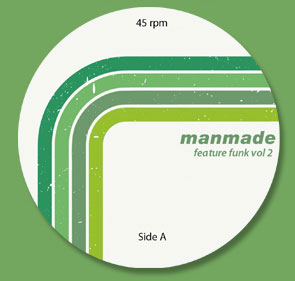 Here’s the second in today’s brace of mash-up 12″s and in truth it’s been out a short minute already – as a swift glance at the MB chart for October will reveal with the Slynk track at number ten. In hindsight that’s languishing way too low. It is the jewel in the crown of this EP and with it Brisbane’s Slynk takes The Three Degrees’ 1970 torch song slowy You’re The Fool, drops in a bit of the ‘Stones, some dialogue from what I think is Beat Street then – as if you hadn’t already guessed – ups the bpms and adds a rather large breakbeat. The other tracks don’t fuck around either.
(Out now on Manmade Records)

(PRESS RELEASE) Once again, Manmade comes out with another fresh selection of funky tracks from around the globe. This time we’re featuring Basement Freaks, Funkanomics, Slynk and Manmade.
With no surprise, this Feature Funk has a wide range of club bangers perfect for everybody to spin. First up with an incredible breaks track, we got BASEMENT FREAKS “Lauren Beat” which is sure to impresses with its driving beats, chunky bass line and well known vocals. The second cut is by FUNKANOMICS. It’s sure to become a breaks anthem. The perfectly arranged Hendrix samples will have “Crosstown Shelter” getting you up on your feet for sure!
On the B side you´ll find CMC&SILENTA’s reedit of “Voodoo Workin”. Designed with fat kick drums, catchy bass lines and unique piano and brass loops, there are no doubts the ladies will shake their hips to this banger. The last cut is by one of the best upcoming DJ and producers from down under, SLYNK with his track “You’re the fool”. This is one of the most banging funk explosions that has ever reached our ears! You really would be a fool not to have it in your record bag.