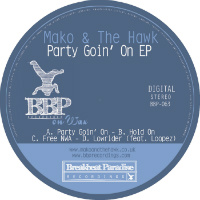 DJs put your booties on, it’s dope out there! Yes – a year after its now sold-out vinyl drop, Mako & The Hawk‘s mighty Party Goin On EP is coming at ya in digital formats in time once again for the summer party season. The action kicks off with the title track – an epic Wiseguys-ish b-boy breaks END_OF_DOCUMENT_TOKEN_TO_BE_REPLACED 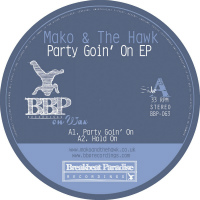 It ain’t final til it’s vinyl! Damn straight and here’s Mako & The Hawk on wax at last – twelve black inches of it – as the slackest duo on the party breaks scene get their shit together in time for the summer party season. The Party Goin’ On EP is the latest from the mighty Breakbeat Paradise Recordings, then. The action kicks off with the title track – an epic Wiseguys-ish b-boy breaks END_OF_DOCUMENT_TOKEN_TO_BE_REPLACED 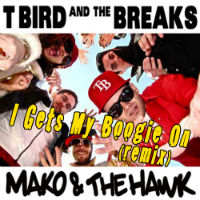 (PRESS RELEASE) Ladies and gentleman, fetch your dancing shoes – it’s the brand-new, debut official remix from dj/ production duo Mako & The Hawk who rework I Gets My Boogie On by Texan funk crew T Bird & The Breaks on a grand scale. Evoking shades of Coldcut’s version of Eric B & Rakim’s Paid In Full and Primal Scream’s Loaded, the reflective gospel-tinged soul of the original END_OF_DOCUMENT_TOKEN_TO_BE_REPLACED 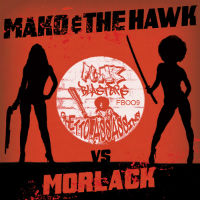 Billed as some sort of martial arts-style music production death match, the Ghetto Assassins EP pits one of the most prolific ghetto funk ninjas against possibly the laziest pair of breaks-shinobi in the known universe. In the last two years, Morlack has dropped an entire album plus more EPs, and freebies than you’ve had hot dinners – whereas Mako & The Hawk have put out a couple END_OF_DOCUMENT_TOKEN_TO_BE_REPLACED

Posted on 14th November 2012 no comments

Bloody hell – it’s been a long minute since these two had anything out and now suddenly, out of the blue, here’s Mako & The Hawk with a brand new video for the first track they ever made – the as-played-on-Craig-Charles-Funk-&-Soul-Show, long-ago-maxed-out-on-soundcloud, Ain’t No Other Big Boss Man. It’s a straight-up, party breaks, mash-up banger of Christina Aguilera’s retro rnb hit Ain’t No END_OF_DOCUMENT_TOKEN_TO_BE_REPLACED 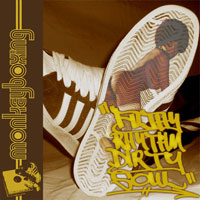 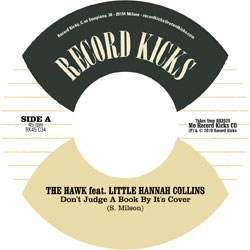 What with the current vogue for all things soul, Big Boss Man bassist the Hawk and former The Heavy/ The Snugs songstress ‘Little’ Hannah Collins head north on Don’t Judge A Book By Its Cover. Obviously judging a book by its cover is the act of a crazed-impulsive though were you tempted in this case to stray from the path of measured consideration – you might be forgiven for thinking this was something that got a good airing down at the Wigan Casino back in the day. High praise indeed in some circles, including (of late) this one. The facts, however, are simply this: that in Don’t Judge… what you get is a proper slice of future retro action – a concept neatly encapsulated in the accompanying video – watch below links. And it’ll be out (correctly) on seven inch, as well as digital. Get down!
(Released 1 March on Record Kicks)
The Hawk – Myspace
Little Hannah Collins – Myspace
recordkicks.net

Posted on 19th February 2010 no comments 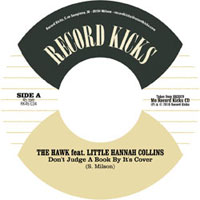 Big Boss Man bassist and monkeyboxing.com favourite The Hawk is back with a hot slice of authentic-sounding northern soul (Read review/ Watch video) featuring the long overdue return of former The Snugs/ The Heavy songstress Hannah Collins on Don’t Judge A Book By Its Cover. And who better to release such a contemporary soul gem than Italian vinyl champions Record Kicks. Also, since its getting both 7” and digital format releases you can be all future-retro in your buying as well as your listening! Plus it’ll be out on forthcoming Record Kicks comp Mo’ Record Kicks – so keep your eyes peeled innit.

(PRESS RELEASE) Record Kicks is pleased to welcome new group THE HAWK feat. LITTLE HANNAH COLLINS, and to announce the upcoming release of their first single “Don’t Judge A Book By Its Cover”, which is also the first single to be extracted from the forthcoming MO’ RECORDKICKS compilation. The man behind The Hawk is Scott Milson, (bass player of critically acclaimed UK funk band on Big Boss Man on Blow Up Records), who already released various tracks under this name, winning over numerous fans and securing airplay from DJs such as Rob Da Bank (BBC 1) and Steve Lamacq (BBC 1).
For this new project Scott teams up with former player/vocalist for The Heavy Hannah Collins to create “a slice of contemporary northern soul”. Much in advance of its release, “Don’t Judge a Book By Its Cover” has already gained the support of Craig Charles (BBC 6) and Francesco Adinolfi (Rai 2), and will be available for purchase on digital download and 45 starting February 22nd, with “If You Wanna Be My Man” by Italian Hammond beat kings THE LINK QUARTET featuring new sister funk queen from the UK GIZELLE SMITH on the B side. Wasting no time at all since the realization of this first track, The Hawk is already back in the studio to record two other songs, soon expected out on RK, so keep an eye out for this and other tracks by this new outfit!
The Hawk – Myspace
Hannah Collins – Myspace
recordkicks.net

Posted on 4th February 2010 no comments 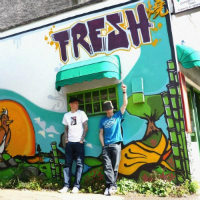 In which Mako & The Hawk apply the same principles to a funk/ RnB mash-up that the Nice Up crew and J Star already apply to reggae and hip-hop. Or at least The Hawk does. Mako described himself ambivalently as ‘executive producer’ and also as the ‘Andrew Ridgley to the Hawk’s George Michael’ on this project. Still, as the producer of the BBC Radio 6 Craig Charles Funk & Soul Show recently put it (shortly before it was played), “Big Boss Man And Christine Aguilera together, should it work? No! Does it work? Yes!” Thus for your delectation: