Tag Archives: Sock It To The Man EP 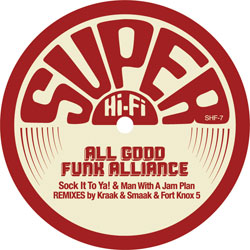 Whatever wellsprings of funk AGFA draw inspiration from they’re not the same as mine. If consuming programmed squelchy disco-influenced beats is your thing you’ll probably be all over this like a rash, the more so if you like your programmed squelchy disco-influenced beats to be especially bland. If, like me, you feel you could achieve a superior result by listening to house music while bathing with your head underwater, periodically trying to alleviate the tedium by thumping the side of the tub to add syncopation and letting out an occasional fart to simulate synth effects – you won’t. Thus I find myself hugely at variance with a range of ‘nu-funk’ scene luminaries quoted on the press release. Who will save me from these turbulent disco pedlars? Where are The Snugs for Christ’s sake?
(Out now on Super Hi Fi)

The All Good Funk Alliance – Myspace