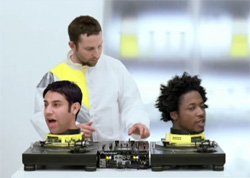 (PRESS RELEASE) Foreign Beggars have geared up for the release of their new album “United Colours Of Beggattron” on October 19th by heading over to the Neurosonics Audiomedical Laboratory to showcase some of the most amazing special effects you’ll ever see.
The Neurosonics Audiomedical Laboratory is described as the “Kingdom of the unreal but also a higher state of being, ultimately free of the limitations of the material world through the agency of science, technology, and imagination.”
Director Chris Cairns teamed up with the UK’s most progressive; Foreign Beggars, Scratch Perverts, Shlomo, Stig Of The Dump and Dr. Syntax to bring you this groundbreaking piece of multimedia artistry. Sound, Vision, Skills, Art Direction, Special Effects and Impeccable editing all come into play create something so special there’s no way you can only watch it once! Behold the greatest breakthrough in Audiomedical Neurosonics.