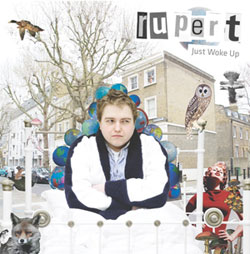 Just Woke Up? Christ, there were times when I thought this would never see the light of day. I’ve been hanging out for the first Rup – oops my bad – RupERT album proper since the motley collection of odds and ends that was Rup On Zebra a while back. Well, I say ‘motley’ – easily one of the best releases of 2007, it would have lyrically smoked anything else into a coma. Cryptic blogs on Rup’s myspace meanwhile suggested that he was over the whole music thing and that’s all (s)he wrote. Thankfully, these have turned out to be little more substantial than an investment banker’s competence, not only has Rupert woken up, he smokes his drugs, doubts his own worth and makes you take a long hard look at your own while convincing you that none of it matters anyway – although – oh – actually it might – all in less than forty minutes. Not the longest album in the world then, and there’s also been a stylistic shift in balance between this release and the last. Those familiar with Rup’s work will probably agree that it falls broadly into two groups – the jump-up banger on the one hand and bitter-sweet (and often hilarious) downtempo musing on the other. Where the former was more noticeable on Rup On Zebra, it’s the latter which predominates on Just Woke Up.
Lest that lead you to believe that you weren’t going to get any bangers at all, let’s set the record straight. In terms of large beats, Steve Clear has to take the laurel for Make Moves, a fat robotic bump which finds a re-energised Rupert leave the sole print of his trainers on your ears at the start of the LP. “We don’t play any more, fuck waiting for doors to be opened/ We’re breaking the doors, you can wait for applause,” he kicks off before addressing those who might question his competence, “And I Know that I don’t/ Look like I know what I’m doing/ But there’s a method to the madness in the road that I’m pursuing”, with a line that affirms it.
The Diaclectic-produced Leave me Out follows and, though the break is lively, finds Rup waxing philosophical (in this instance about love, lust and drugs) as do the next two (with Naim and Evil Sun at the controls respectively). Four cuts into the LP and as many producers, there’s a coherence you might not expect. Obviously partly to do with Rup’s choice of producers it’s also quite definitely to do with his force of personality. Where else are you going to find a rapper dropping verse like “I walk in the park but I’m walking in trainers, sewed by youngsters it’s awful I hate it/ But I’m so basic, that if I like something I blatantly take it, but the drugs are probably made by the same kids that made the trainers,” followed by surreally whimsical choruses in the vein of, “Something that you like/ Like sunshine in my mind/ Like ice cream on my shirt/ It tastes good and smells nice/ Like girl on girl,” over spacey Scandinavian electronica?
Posse cut South Of The River sounds like a block party in your favourite local curry house, bigging up all fings dirty saaf (including – er – Croydon “As saaf as it gets”) and then it’s pretty much Rup rapping over moody electronic beats and female vocal hooks til the end. In a good way. Also, I can’t not mention the weird gem that is The Fox where Rupert savages urban life over a double bass and DJ Manipulate does a laudable impersonation of a bushy-tailed canine with nothing more than his own two hands and some vinyl.
While it’s true that this does weigh in at a bantam-weight thirty-four minutes and I could have handled a few more party cuts, brevity of duration is more than made up for in other ways. If Just Woke Up confirms one thing it’s Rup’s gift for understated but razor-sharp social commentary over reflective beats. If you want better delivery or wordsmithery this year you’ll have to go a bit further than just crossing the river.
Out now on Hear Today Records