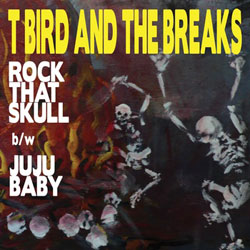 Obviously keen (in the wake of a rash of international releases) not to let the rest of the planet forget which country funky-ass soul originated in, T Bird & The Breaks return with some super-heavy Texan funk. The band upped the ante last month by stating their resolve to release a new single every month for the following six months and promptly made good their word by dropping the breaks/ horns driven Monkey Wrench backed with the loping swamp groove of Nightshade Mary. And when I say backed I mean literally – not only are downloads available but you can actually buy these singles in classic 7” format…only if you’re quick though – it’s all about the limited editions so don’t sleep on it. December’s release has now appeared in the more uptempo voodoo-themed Rock That Skull backed with the organ/ harmonica tinged Juju Baby both of which recall, by turns, everything from Dr John to The Majestics to very early G Love and Special Sauce. All cuts are vocals and feature the melodic rasp of T Bird himself. If you’ve already checked out the band’s debut LP Learn About It you can expect similar high standards but a fuller production sound a la Sharon Jones & The Dap Kings. Chek.