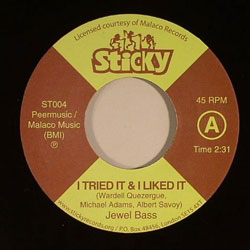 The Sticky label do it again with a double slice of re-release action but (and no disrespect to ‘Caribbean Soul King’ Richard Stoute’s classic northern soul gem) it’s all about the repress of the ultra-rare Jewel Bass track. Yet another long-lost Mississippi soul sister cut, this works along the same lines as it’s musical cousin – Jean Knight’s Mr Big Stuff. Dominated by vox from Ms Bass and – er – the bass, it’s the kind of downtempo funky bump that is impossible not to hear without having a shimmy. Less a funk track than aural serotonin really.
(Out now on Sticky)