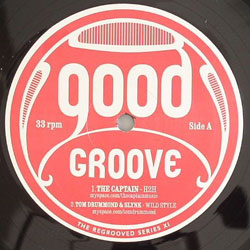 It’s refix time again and while the original versions of the tracks on here might have been around the block a few times that doesn’t prevent the dirty foursome assembled by the Goodgroove label giving them various kinds of ‘extreme makeover.’ Somehow I suspect the inspirational drug of choice during the making of these was MDMA. Except for The Captain who obviously washed downed several family packs of Haribo with a two litre bottle of Coke during the creation of H2H.
(Out now on Goodgroove)
(PRESS RELEASE) The Regrooved series is still doing what it does well, 4 huge and varied tracks from all over the world. The Captian aka Fab Samperi from Italy displays his skills with an uptempo bossa style version of a classic funk track. Slynk teams up with fellow Australian Tom Drummond to create a smooth breakbeat club track, Tom better known for his house production which you can hear coming through in the track. Slynk also has a big solo track on this vinyl, his 80’s styles are shining through in a big way here. Lastly Stickybuds from Canada brings his fat bass and solid beats, this track is a must have for all funky DJ’s that like it beefy.
Listen to Goodgroove: Regrooved Series XI
Goodgroove – Myspace
goodgrooverecords.com