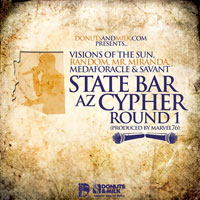 It’s yet another one from workaholic Tucson emcee Savant who this time invites a few of his mates around (apparently under the auspices of Donuts & Milk to drop a bomb-track posse cut over a beat from Marvel 76. It’s an uptempo affair, chock full of ill rhyme play about how dope Arizona hip-hop is (and judging by this, that’s fairly dope) with a rather interesting retro organ stabs throughout and fuzzy guitar chops on the outro. Don’t they have any TV in Arizona? The rate Savant’s putting stuff out END_OF_DOCUMENT_TOKEN_TO_BE_REPLACED