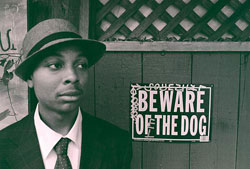 It’s been some time since the last Underexposed! but fear not this one’s a doozy. PostModern Escape Artist hails from San Francisco and drops trippy cinematic breakbeats like they’re going out of style. Well, alright, if we’re being honest they did go out of style some time ago, so he’s clearly no slave to the constraints of fashion. Mind you – with a name like he’s got he’d probably point out that ‘fashion’ is a relative term anyway given the fragmented nature of reality. All that notwithstanding, such musical fayre is surely due a revival in the next half decade at some point – after all it is fifteen years since the whole Bristol sound/ Mo Wax/ Ninja Tunes thing blew up and the key movers in that scene were already making noises before that. P.M.E.A. himself is more likely to namecheck Shadow, RJD2, Wax Tailor and Dan The Automator (fair enough really as several tracks feature rappers) and he’s apt to use cinematic flourishes from a range of movie themes taking in noir, sci-fi, old school kung fu and pretty much anything in between – which also gives it something of an early Depth Charge feel. His bandcamp site features two quality free LPs for download and I have it on good authority that another gem is on the way. All that and he’s not even in his third decade – one to watch then – cop the LPs here:
Beats & Collabs Vol. 1
Last Train To Nowhere
…and check out the vid below links…
postmodernescapeartist.com
PostModern Escape Artist – Myspace