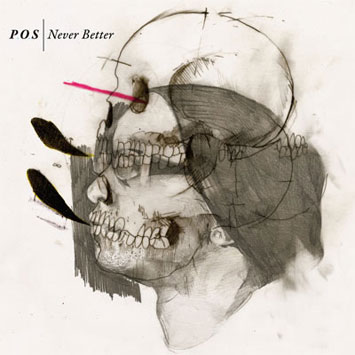 According to that organ of truth Wikipedia, P.O.S’ music ‘cannot easily be labelled’ though he has allegedly described his music as, ‘rap to skateboard to.’ I was only two tracks in before I started thinking of it as ‘music to skate away from’. There’s a label. And here’s another one – ‘experimental hip-hop.’ As in ‘emo’ lyrics and the kind of beats which aren’t going to move a crowd – unless it’s one that’s into slam-dancing. In fact, there was actually so much against me liking this that it’s testament to P.O.S. that this has got as many stars at it has. The cd cover didn’t help. The fact that it uses more plastic than three toy factories is bad enough – what’s worse is the raison d’etre. Yeah – it’s all so that the ‘consumer..[can]…configure their own personalised cover art.’ Surely it’s all about the music though? You’d hope so wouldn’t you? But the wankery doesn’t end there. No. ‘Configuring’ your cover is so fucking complicated that label Rhymesayers had to release a demonstration of how to, ‘approach the packaging.’ Christ on a pony.
Anyway – back to the music. Never Better is very much the product of an artist with a background in American alternative rock (in P.O.S.’s case hardcore punk) and it is no doubt to broad-minded rock kids (or broad-minded hip-hop kids) that it will appeal the most. This LP is peppered with clever but really annoying ideas – second track Drumroll for example, with it’s alt-rock guitars, shouty hardcore (as in punk) vocals and a beat which is – yeah you got it – a drumroll! Or The Basics with what sounds like a loop of a live drummer playing a dnb break and it’s annoying shouty ‘Alright’ hook.
One of the main things that redeems this LP for me is that (even when it’s being clever but irritating) the production is actually really good. Partly this is down to P.O.S. himself, but also his hip-hop ‘collective’ Doomtree mates Lazerbreak and Paper Tiger. When he does manage to rein himself in long enough to drop a straight-up hip-hop track with a decent breakbeat they’re actually pretty good, though the first time this happens isn’t until third track Savion Glover. Later you’ve got album highlight Goodbye with it’s eighties soul-wail loop for example, or Low Light Low Life which has a strings sample that weirdly recalls Dr Dre’s Next Episode. The only problem you’ve got then is that these all sound like highly accomplished pastiches of Atmosphere tracks – especially Been Afraid. Plus there’s the fact that the occasionally politicised lyrics more often than not really want to rock a floppy fringe, black nail varnish and eyeliner, “You see the small scars creeping down her arm…” and so on and so forth.
If you fall into the specialist demographic that likes El-P, Atmosphere and Propagandhi you’ll probably shit when you hear this. If, like me, you belong to the specialist demographic that thinks that El-P couldn’t make a dancefloor beat if his life depended on it, that Blink 182 and Sum 41 (not to mention Busted and McFly) have viciously and cynically neutered the legacy of Bad Brains and Black Flag and wish Atmosphere would be less earnest more often – you probably won’t. If you do belong to the former though, you might want to check out the video below for album track Optimist.
Out 27 April on Rhymesayers