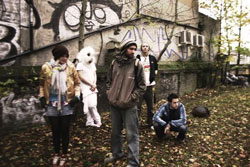 (PRESS RELEASE) A 5 strong banana bunch of trouble, remaking the world of hip-hop in their own image. Banging at the gates of heavy entertainment, lean lyricists Sherlock and Leon Rhymes bounce off the soulful vox pops of MC Source and the beatbox genius of Pikey Esq (UK Beatbox 2007 finalist), tied together by scruff-bag disc-jockey-cum-producer, Something Else.
Their story is one of true grit and urban grime, having met over tea, cheap booze and a lot of pot. From the humble beginnings of rapping over stolen or otherwise plagiarized instrumentals, QE would regularly bash one out at the acclaimed club night-cum-money-laundering-outfit, Cowboy Tactics. After graduation from Leeds Uni, our heroes soon found solace in London town, hooking up with the unwashed brilliance of Something Else and hyperactive nut-job Pikey Esq.
With funds stolen from their little sisters’ ISAs, Queens English produced their first EP, “Mind The Rap.” The band have worked extensively with (and severely irritated) the likes of DJ Skinny (a.k.a. Nu Balance), Embee (of Sweden’s Looptroop), Babar Luck and Aries to develop, in Time Out’s words, “genre straddling excellence.”
“Wonderful, epic tracks” – Tom Robinson, BBC Radio 6
”If The Streets are the streets, then Queens English are the Royal Mile” – 4Music
”Queens English have burst onto the scene like a breath of fresh air”– Knowledge Magazine
Festivals QE are banned from:

Bands who refuse to play with QE any more:

Cities in which QE are wanted for traffic offences:
Nottingham, Leicester, Brighton, Leeds, Oxford, Cambridge, Manchester, Ipswich (and most of Suffolk), Stockholm, Gothenburg and many more…
Their debut album, ‘EQ’ has been received like caviar and crackers by the syndicated press, abusing air time on 1Xtra, BBC Radio 6, Ninjaradio, Dissident Island, TunA the Day and many more. 2009 has already seen the group hit the festival circuit hard and the evolution of their live stage show. Despite all of this, QE remain an unsigned act resorting to signal flares, a fake charity phone-in and a botched appearance on Ant & Dec’s Saturday Night takeaway (never broadcast for legal reasons) to raise their profile.
When all is said and done, no press release, however silly and narcissistic, can hide the drive, determination and talent that explode onto the stage when QE steps up to the plate.
In the words of their other spiritual leader, Yazz, “The only way is up.”