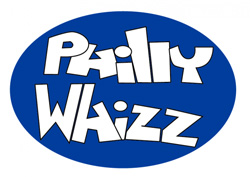 It’s been two years since Philly Whizz’s excellent Random Era collaboration with partner in crime Ash The Gent and this second solo LP from the respected Scouse MC takes a typically no-prisoners approach to life as a rapper in a genre that is overlooked (UK Hip-hop) and in a city where (if Philly Whizz is to be believed), Shameless is less comedy and more documentary.
Inevitably, anyone familiar with the Random Era LP will find themselves making comparisons with this – and, for the first two thirds of the LP they will find this one somewhat different. As the title Inside The Axe Wound would suggest – shit isn’t always pretty though it’s related with black humour. Sick And Tired’s world weary observation is fairly representative thereof, “This is a story that must be told/ This isn’t a place where you wanna grow old…Nothing’s gonna change, nothing’s happenin la’/ But it’s alright we got Ringo Starr/ Scallies in the front, scallies in the back, prossies everywhere and they’re all on crack.” We Don’t Really Care finds Philly joined by Systems D for an amusing swipe at the industry, both the wannabe try-hards and mercenary southern A&R types. D.T. and C.B. is one of the more dancefloor-friendly efforts here – where Philly has a crack at groupies but the group who take the brunt of Phil’s ire (on more than a few tracks) are those males who constantly hide their insecurity behind posturing and brutal, random violence. A worthy crusade but after a while it becomes a little wearing to listen to and on One Man Mafia every bit as annoying as the people it critiques. Shawn on the other hand is a sympathetic ska-hop portrait of the archetypal boy on the verge of going bad due to lack of parenting and a state safety net with more holes in it than a sieve that’s been used for shotgun target practice.
When you get to the thirteenth out of sixteen tracks however, there’s a sudden and noticeable change. It’s almost like you’re listening to a second shorter EP bolted onto the first longer one. Shit gets all mellow and funky, the mood changes and it’s almost like you’re listening to – er – well – Random Era. Indeed, when Ash ‘The Gent’ Nugent pops up on the woozy stoned groove Slow Lane, you are. Keef and T.L vehicle All Mouth makes great use of a sample of the Life Of Brian stoning/ ‘Jehovah’ scene and Can’t Rewind maintains the mellow. Things are brought to a close by Shit City which melds the edge of the earlier tracks with the funkiness of the last few. Consistent and competent, and free of Philler (Leave it out! Bad Puns Ed.) – would that it had just a little more killer.