Tag Archives: On The Sly 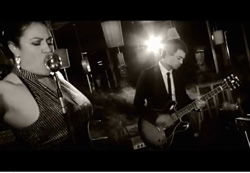 (Read full album review of Bamboos’ LP 4 HERE)
A well-deserved full marks for On The Sly (LISTEN/ WATCH below) as The ‘Boos get downright sexy with this massive slice of super-heavy funk-slink punctuated by colossal hammond stabs and fronted by an ultra-sultry Kylie Auldist who trounces her own last single with ease. But enquiring minds want to know – is Auldist (listed in the press release as ‘regular guest vocalist’ but band ‘member’ on bamboos.com) a band member or not? The monkey would hate to get that wrong after the last spat with Cookin’ On 3 Burners’ number one publici- er I mean fan…
…Flipside Turn It Up (currently available as a digital download – LISTEN HERE), on the other hand, finds Lance and co. providing a meaty flatbed of funk for former Quannum rapper Lyrics Born who squanders both this and his own highly respectable soul rasp somewhat with a fairly limited melody and thus fails quite to recapture the glory days of his late 90s Poets Of Rhythm collab I Changed My Mind. Doesn’t matter, you’ll be replaying the A-side ad nauseum anyway – check the vid below. Heads up for fourth album – er – 4 due March.
(Out on Tru Thoughts 8 February 2010)
The Bamboos – Myspace
bamboos.com