Tag Archives: Not So Average 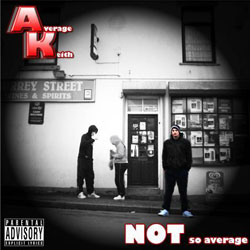 Runcorn MC (no, really) Average Keith is about to drop his debut LP on Random Era’s home label. I did a little bit of research on Runcorn as the only thing I knew about it was that it was in Cheshire. It turns out that Keith isn’t the town’s only musical luminary as Nicola Roberts of Girls Aloud is also from there. Mind you, I got that off wikipedia so it could be utter horseshit.

From the home of 2 Pints Of Lager And A Packet Of Crisps, Runcorn emcee Average Keith is set to release his debut album ‘Not So Average’ through Go Wise Records. The album, a 12 track, 2 man production by Keith and legendary St Helens/Liverpool Rapper Philly Whizz) contains a guest list of some of the Liverpool hip-hop scene’s finest: J. Taylor, Oshea (Don’t Flop Battle Rapper), Damo da Famo, D.O.T, Josh of Systems DMC, MC M.O.S, Funky Dialect’s Que Cee and Elemental, the female vocals of the talented Karina and the crafty handwork of DJ Nimble with the scratches.
The album explores the day-to-day cycle of what Keith and many so-called ‘average’ people experience and styles range from the aggressive dole queue fodder raps of ‘Just A Scruff’ to the more laid-back style of chasing a girl you can’t have in ‘Hard 2 Get.’ Keith focuses on the main topics of most people his age – going out and getting drunk at the weekend in many different situations such as clubbing (‘Saturday Night’), house parties in ‘1 Drink 2 Drink’, having a pint around the local town (‘Common Folk’) to being glad the working week is over in ‘End Of The Week.’ Average also takes the listener on a journey that depicts the experience of most youngsters of modern times from being on the dole to getting a job with the hilarious rhymes of ‘Bin Man’ and the boredom of being stuck at home when he should be out partying in ‘Turn Off The T.V’ where he reflects on his skint mates and having to watch shit programs before he can get a bit of enjoyment out of ‘Match Of The Day’ or ‘Babestation’ later on. Keith even rips into himself in the title track focusing on the fact that you don’t have to be bad or a thug to be a rapper. The album finishes with a proper head bopper in ‘Beats Are Cheap (Don’t Speak)’ produced by Funky Dialect’s Que Cee in which Philly Whizz and Elemental jump in to take the piss out of modern day hip hop and the stereotypes that surround the genre.