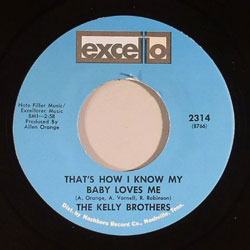 The second classic 7” release of last week – (the first being the Jewel Bass repress) is this 1970 single from The Kelly Brothers. ‘A’ side That’s How I Know My Baby Loves Me is classic Northern Soul fare while the superior uptempo funky-soul bomb Not Enough Action steams in at just over two minutes but languishes on the flip. Actually it’s not that much of a trial. You can turn these things over. My one’s got greasy pawprints on it and a sleeve that is worn and yellowed with age that someone’s either worked very hard at making look old – or it ain’t a repress. High-octane stuff that you’d trade your own grandmother for if it wasn’t going so cheap.
(Out now on Excello US)