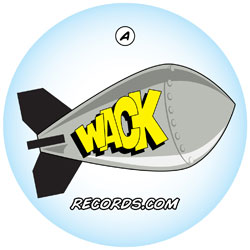 Christ! Wack 09 was only out five minutes ago and now here’s this summer nugget already. No Diggin is yet another refix of Black Street’s No Diggity and I gather that Lisbon producer Dedy Dread engendered this fresh mid-sixties Motown versus Bossa beat-crosser and then passed it to Newcastle-based beat-head Smov a.k.a Smoove – to play around with too. You might have thought that the prolific Smoove would have enough beats already to make Dedy’s trans-European manoeuvre a bit like taking coals to Newcastle (see what I did there?) but apparently not. The result is the product of some quite abandoned genre-splicing – a practice which can be a bit like drunk people making ‘cocktails’ out of leftovers at a party: it’s either a murky abortion or an exotically fruity marvel. This is the latter – no diggity. The fun doesn’t end there though, for who should turn up on the flip but Funktomas with Shake Shot, a beefy slice of Sly Stone sampling super disco breaks. Out on limited 7”…soon. Snooze and you lose! Press release beneath vid:


(PRESS RELEASE)
A track that was originally born in Lisbon (Portugal) by Dedy Dread and transported through space landing on Newcastle (U.K) soil to be treated with the unmistakable drum hellish sound of smov. The final result being this crazy ass shaking bossa funk rockabilly jazz dance bomb!

Hailing from Hamburg Germany Funktomas drops a some what classic B Boy anthem “Shack Up” over some old skool flavour female chants creating a simple but very effective banger!… I bet you cant put one of these in your turntable without droppin into the catapillar?