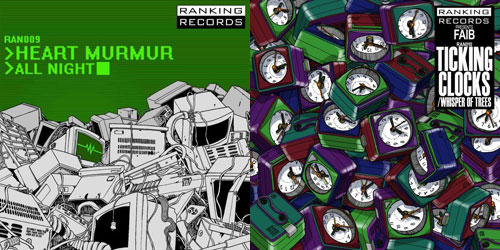 Johnny ‘Mr Lee’ Lee says his name ‘is like the Chinese equivalent of Mr Smith…generic and anonymous’ – in other words, nothing like his striking artwork. Most happy with a pen and pencil, he is not averse to exploring the possibilities of computer generated images and as you can see he’s not a man bound by any particular genre, citing film as one of his biggest influences – in particular blaxploitation and Kung-Fu flicks. It’s an influence that comes through in his record covers for a friend’s dubstep label Ranking Records, work which, he says, was what got him back into his artwork after a break. Mr Lee has a number of projects on the go currently, including more record covers, a tattoo design, and character-based images for breakbeat culture club night Vagabondz, he’s also keeping quiet about a few other ideas referring mysteriously to, ‘some collaborations’. With regard to the future he mentions an interest in clothing design, animation, tattooing and even haircutting. One to watch then, given that the stuff you see here has all been produced this year. Hit the man up at:
mrleelives@gmail.com