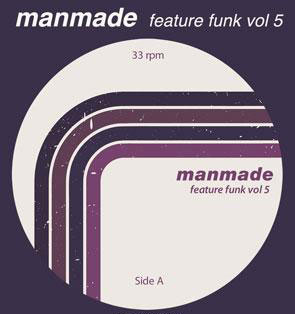 It’s the fifth volume from the Manmade Recordings crew and once again it’s label bosses CMC & Silenta who produce the best cut with the pneumatic genre-splicing monster Rock Da Riddim. Thankful as I am that the 90s big beat stylings of Vol. 4 have been left behind I’m not convinced that DJ Kid Stretch’s speedy breaks-plus-Moose-T loop is the way forward. Neither am I sure about Funkanomics’ On The Floor which, despite containing a sample of Tina Turner’s Funkier Than A Mosquito’s Tweeter comes on like a disco-Tyrannosaurus or Mr Fudge’s Damian Marley-fied Boot All Night – though my baby daughter had a bit of a boogie to that one so it can’t be all bad.
(PRESS RELEASE) Feature Funk Vol5 brings back the NuFunk to all you breakbeat and jungle fans out there…This very diversified Ep comes with tracks by CMC&Silenta, the well known DJ Kid Stretch, based in Thessaloniki, Greece, the German break beat stars Funkanomics and Canadian breaks artist funking up Seoul: Mr. Fudge.
CMC&Silenta thought it’s time for a nasty old school- jungle flavoured track for all the classic breaks fans. Next one is an unbelievable funky breaks track by well known Dj Kid Stretch, perfect for all you horny funky manmade- track lovers and already a bboy favourite track. He is main DJ in the Battle Of The Year Balkans bboy competition, DJ and producer of the Greek hip hop group “Warriorz” and “Warriorz Records” owner. With “On the floor”, Funkanomics splash their typical sound on fat beats once again. This tight production is sound from another galaxy, maybe the guys should have a place on MIB 3, alongside Michael Jackson and G.W.Bush?! OK, If you go to a small club in Seoul, take the brilliant DJ Mr.Fudge, ask Damien Marley to grab the Mic and squirrel it all together – you will get a driving reggae breakbeat tune like this one.