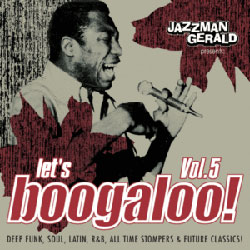 Yeah alright, so this has been out a while – bite me. Anyway, it’s not like my tardiness is entirely at odds with a compilation that was initially supposed to have been released about two years ago. In fact, last I time I checked, German modster Frank Popp was in charge of the compiling. Still, better late than never we find veteran crate-digger Jazzman Gerald has capably taken the reins and delivered a polished finished product. It does have to be said that a fair proportion of the cuts on Let’s Boogaloo Volume 5 are licensed to his label Jazzman Records funnily enough – but then you would wouldn’t you? Some of these include super heavy funk by original soul sister Keisa Brown’s Dance Man and seventies Bermudan funkers The Invaders’ monster-break-toting Spacing Out (sampled last year by Mako & The Hawk on Spacing Rasco) among others. Then there’s the more esoteric nuggets like The Natural Yoghurt Band’s Soft Cheese (which seems to have jacked Money Mark’s steez somewhat), jazzy shit like John Heartsman’s Mr Magic (well – he is called ‘Jazz’man Gerald) and Latin bangers like The Soul Fantastics Funky Puggin. Among the highlights are understated gem Newborn courtesy of the mysterious Shade & The Soul Destroyers and the gravelly-voiced Billy Larkin’s ancient Funky Fire with which, it transpires, Gerald seems to have turned up the track upon which crazy blues-funk Frenchman Don Cavalli has based his recent career. Props to JG then for the best and most varied funky comp this year – even if the competition has been somewhat thin on the ground and (lest that praise seem too faint) let’s also add that with Volume 5 he’s respectably held his own against Andy Smith’s Volume 4. Volume 3 is still the daddy though. Ssshh.

P.s. I vote we have the foxy lady cover theme back for the Volume 6. I’m also available for compilation duty too…