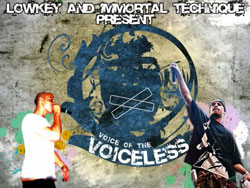 (PRESS RELEASE) Voices of the Voiceless is the long awaited first collaboration between two of the world’s most conscious recording artists, Lowkey and Immortal Technique.
Lowkey who hails from London is the fastest rising star in British urban music having racked up over 100 shows in 2009 so far as well as giving talks and lectures at political events around the world. The rapper/poet of mixed Arab and British descent has been dubbed as “one of the best lyricists in the Western Hemisphere” by Benjamin Zephaniah and has been wowing audiences as a solo artist as well as in the Indie/Hip Hop superband Mongrel (made up of members of the Arctic Monkeys, Babyshambles and Reverend and the Makers) for which Lowkey is a lead vocalist.
Immortal Technique has been dominating in the independent music arena for the last 5 years with his last two albums (Revolutionary Volume 2 and Third World) selling in their 10,000s on his independent label Viper Records as well as him touring the world drawing huge crowds in all continents.
Both artists are known for their no holds barred political commentaries and supreme lyrical ability and this single is a testament to that with its eerie production a perfect match for the hauntingly poignant lyrics.