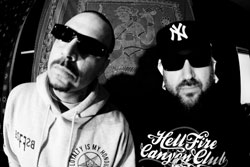 Cypress Phixion or Non Hill? You’d like to think Muggs will bring it like he did the first two Cypress Hill LPs and Ill Bill will kick it like he did on The Future Is Now but what are the chances of that in what has thus far been another lame-ass year for hip-hop? August awaits…
(PRESS RELEASE) DJ MUGGS vs ILL BILL “KILL DEVIL HILLS” WILL BE RELEASED AUGUST 24th, 2010 ON FAT BEATS RECORDS
Produced Entirely By DJ Muggs, “Kill Devil Hills” Features Guest Appearances From B-Real, Raekwon, Sean Price, Everlast, Slaine, Chace Infinite, O.C., Q-Unique, Vinnie Paz & Sick Jacken
DJ Muggs is one of the industries most talented and best known producers. Since Cypress Hill’s formation in 1991, the pioneering rap-rock quartet has come a long way from the streets of South Central L.A. Over the course of its 19-year history, Cypress Hill has sold more than 17 million albums worldwide, including more than 11 million records in the U.S. alone. The group has garnered 15 multi-platinum, platinum and gold certifications from the RIAA; headlined Lollapalooza, Woodstock and the group’s own Smokin’ Grooves tour, appeared on “Saturday Night Live,” made the late-night talk show circuit—all the while breaking down the musical and cultural barriers between hip-hop, alternative, metal, rock, reggae, ska and Latin music. In 2008, DJ Muggs, along with Cypress Hill received a VH1 Hip Hop Honors, to celebrate the vision and innovation that the group continues to bring to Hip Hop, strengthening its force around the world.
Yet, that only touches on what Muggs has done as a member of Cypress Hill, as his highly-influential solo-projects (‘Soul Assassin’ Series, ‘Grandmaster’s’ with Wu-Tang Clan’s GZA) and not to mention producing hits for House of Pain “Jump Around” and Ice Cube “Check Yo Self” among many others. Ill Bill was obviously honored to be working with Muggs, as he affirms “I’ve always been a huge Muggs fan and his ‘Vs.’ series is one of the last places to hear the vibe that made albums by Cypress Hill & Gang Starr so dope. Not too many producers can craft an entire album on their own, let alone an album that’s a classic. Muggs has done it many times over the past 20 years. It’s an honor to be part of that legacy.”
For the vast majority of his career, whether solo or in a group capacity, Muggs has established a precedent for working hand in hand with artists and creating cohesive bodies of work, rather then spreading around beats from project to project and that rings true once again on ‘Kill Devil Hills’ “I prefer getting in the lab and actually creating projects with people instead of just sending out beat CDs. I’m a producer in the fullest extent, where I like to not only produce an album; but craft an album. Being able to start a record from the beginning and following through with it, making sure that all the songs compliment each other. I’ve always come from making albums and producing my records—I’m still into that” relays DJ Muggs.
Ill Bill was a founding member of Non Phixion who released their seminal debut, ‘The Future Is Now’, in 2002 and has also released two influential solo LP’s. Bill has also released an LP as a member of the bi-coastal conglomerate La Coka Nostra (which also includes Everlast, Danny Boy and DJ Lethal of House Of Pain and newcomer Slaine). Ill Bill’s ‘The Hour Of Reprisal’ (2008) showed flashes of what the future would hold, as Bill & Muggs collaborated on two tracks (“This Is Who I Am” & “Only Time Will Tell”) for Bill’s most recent solo-LP.
‘Kill Devil Hills’ is entirely produced by DJ Muggs and features appearances by B-Real, Raekwon, Sean Price, Everlast, Slaine, Chace Infinite, O.C. Q-Unique, Vinnie Paz and others, but by going where instinct took them, Ill Bill & DJ Mugg’s collaborative union manifested into a sonically cohesive album; seemingly very organically as Ill Bill asserts “”Production & conceptually, this record plays out like a movie. All the songs connect. It moves like a concept record the way the beats blend with the words even though we didn’t plan it like that. It’s basically it’s own sound, the Muggs vs. Bill sound” and Muggs adds “the chemistry between us was very natural. Any decisions we had to make, it was easy, like we’d worked together for years. When we sat back & heard the final product, man, we were both blown away.”
Tracklisting and credits for DJ Muggs vs Ill Bill “Kill Devil Hills” LP:
1.) Cult Assassin
2.) Trouble Shooters f/Sean Price, O.C. & Sick Jacken
3.) Paul Stanley
4.) Illuminati 666
5.) Amputated Saint f/B-Real
6.) Skull & Guns f/Everlast & Slaine of La Coka Nostra
7.) Giants Stadium f/Q-Unique
8.) The Owl
9.) Millenniums Of Murder
10.) Chase Manhattan f/Raekwon
11.) Luciferian Imperium
12.) ILL BILL TV
13.) Secrets Worth Dying For f/Chace Infinite
14.) 2013
15.) Kill Devil Hills f/B-Real & Vinnie Paz
16.) Narco Corridos f/Sick Jacken & Uncle Howie
(****All Tracks Produced By DJ Muggs)