(See Monkeyboxing.com – Top 10 Albums – 2012 HERE)
There was no way it was ever going to be a mere top ‘ten’ this year as it’s been a bumper year for bangers – so here’s fifteen. As always, choices were made using a highly complex selection-algorithm based on how often shit got played on the MB sound system.

Posted on 27th December 2012 no comments 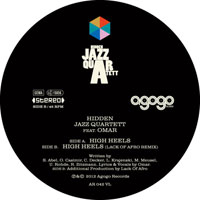 This one’s called High Heels by Hidden Jazz Quartet and features Omar – (here sounding a little bit like Alison Moyet) fretting about where his chick is at 3 in the morning. But enough about that – let’s talk about the important bit which is the B-side rerub where Lack Of Afro produces dancefloor gold through remix alchemy – check it below. Out go the jazzy percussion, sax-wanking END_OF_DOCUMENT_TOKEN_TO_BE_REPLACED