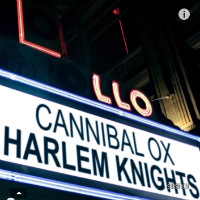 Blimey get your skates on, the last truly great underground hip-hop crew of the 90s/ noughties explosion, Cannibal Ox are playing the Big Smoke tomorrow night to promote their Blade Of The Ronin LP, this year’s epic follow-up to 2001’s The Cold Vein. The monkey can vouch that they’re definitely worth a look having caught them in the Little Smoke last week. To whet your appetite END_OF_DOCUMENT_TOKEN_TO_BE_REPLACED