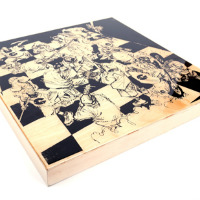 The fetishization of early Wu material continues with the limited edition release of the the remastered instrumentals of GZA‘s classic Liquid Swords LP which are now available for a limited period only in a variety of packages that generally consist of some combo of the vinyl instrumentals and screen printed or even wood block artwork. The pricing’s not quite as ridiculous as the multiple END_OF_DOCUMENT_TOKEN_TO_BE_REPLACED 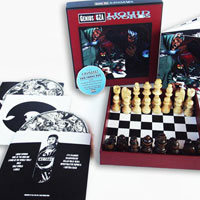 Neither the first Wu solo effort nor even GZA’s first solo album, Liquid Swords has to be one of the best (as well as one of the most famous) LPs from the Wu-Tang Clan camp and now it’s getting a special edition re-release. The LP saw legendary mic manipulator GZA give it large on his favourite topics over thirteen of RZA’s trademark haunting loops and crisp breaks with snatches of ridiculously over-the-top dialogue from Shogun Assassin END_OF_DOCUMENT_TOKEN_TO_BE_REPLACED

(PRESS RELEASE) One of the defining moments of this year’s SXSW was the pair of surprise collaborations between Atlanta garage rock rabble-rousers The Black Lips and Wu Tang impresario GZA. This first took place off the beaten path at The Compound for Dickies Battle of the Bands, inspiring the unlikely pair to enter into a whole new chamber together. Soon thereafter, rumblings shot down 6th Street that the unlikely collabo might occur again at The Vice Records Showcase later that night at Emo’s. Sure enough, immediately after the band took the stage, GZA emerged to a roomful of cheers and slack jaws. The following week, the web was atwitter with reports from both events and a grainy MTV video documented a piece of the experience.

Anyone who missed the display of hip-hop and gutter-rock allegiance has a chance to get in on the action. Indeed, the Lips are releasing an iTunes EP including “200 Million Thousand” fave “Drop I Hold” along with a never-before-heard version of the song featuring verses from the Genius himself, GZA. In addition, the release will feature an instrumental version of the track and the video for the album-version of “Drop”. All this, for a whopping $1.99 during its first week of availability, beginning Tuesday, May 5th. Hear for yourself below:

Black Lips are also on tour in the UK throughout May on the following dates: