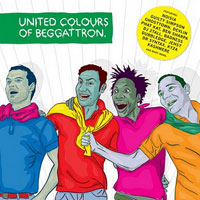 I’ve said it before and I’ll say it again, this autumn has had a mad crazy release schedule as labels everywhere make up for the fact that they could barely be arsed to release anything in the spring. As a consequence, review turnaround times have been shorter than an old-schooler’s come back. Given that the UK hip-hop underground’s ‘most-likely-to’ (that’ll be the FBs) have new album United Colours Of Beggattron out on Monday that left only one option. That’s right – it’s time for a ‘byron’. You must know the drill…

MOVE HIGHER (Audra Nishita)
Sounds like the slow intro-bit to a mid-nineties Goldie/ Metalheadz track. All the way through. With rapping on. Apparently FBs have been around for ages but haven’t got the recognition they deserve. A fresh topic you’ll agree.

BREAK FREE (feat. Audra & Kai Nishita)
The third track with a positive mental attitude title, yet another rnb hook and a kick drum I can barely hear. I went to switch the kettle on during this one.

DON’T DHOOW IT (Feat. King Knut)
Sounds like a Cool Kids beat but Foreign Beggars rapping – first one that makes my ears perk up. Mainly because it reminded me of Cool Kids.

SEVEN FIGURE SWAGGER (Feat. Dubbledge, Badness & Rednaz)
A chorus that won’t leave your head all day, this is P.R.O.P.E.R.

CONTACT (feat. Noisia)
…as is this. Deserves to be as big as Root’s Witness. Huge beat by Dutch dnb heads Noisia. Some twat on a site called monkeyboxing only gave the single 3.5 out of 5.

SHAKE IT (feat. Noisia)
The one where the boys get a bit ‘naughty’. Contains cerebral rhymes like, “Love to take you out on a date if I could/ Maybe let me give you a taste of my wood.” On reflection, makes me think of filthy bumping and grinding so not that bad.

GET A BIT MORE
The synth-keyboards one.

CORRIDORS (Skit)
This one’s a skit too. Well – more of a 30 second beat really.

ASYLUM BOUND (feat. Ben Sharpa)
Starts with a voice like that Asian Fonejacker character who works for an ‘internet service providings’ call centre. But set in an asylum. About going mad or something. Probably sounds better if you’ve been at the green.

BIG N’BLACK (Phat Kat)
Starts off with a Chicago sample making you think it’s about to turn into a M.O.P. style banger. Then goes a bit tinny – probably so it sounds good on the kids’ mobile phone speakers. Not the best beat for Phat Kat’s 50 second phoned-in rhyme – he sounded much better on DJ Design’s last LP…

PROVE IT (Guilty Simpson)
…as did Guilty Simpson funnily enough. How’m I supposed to get amped off something that permanently sounds like it’s going to kick off but never does?

SOME ADVICE (Skit)
Scratching at the start wakes you up but it turns out it’s a skit.

NO MORE (Kashmere, Jehst & DJ 2Tall)
Arguably the best lyrics on the LP but sounds like it was made during a mad ketamine binge at the Dented studios. Could have done with being a bit faster and having more bass.

KEEPING THE LINE FAT (feat. Graziella)
Mid-nineties female garage vocal hook, a beat that sounds like late-era disco ramming grime at the lights and FBs rock up about a third of the way through. The sound of arriving at some sort of ‘Grime-fest’ in Michael Knight’s K.I.T. In a good way.

SAFEDRIAN
Instrumental. Sounds like a last track. Mind you, so do quite a lot on this.

COMMENTS: Props to the FBs for attempting to craft an album that aims to maintain underground credibility while giving the pop charts a sly grope but United Colours of Beggattron basically revolves around a three track centrepiece with satellites of largely decreasing interest either side, despite a slew of heavyweight UK and US guests. As an LP this has the same sense of anti-climax that I got from Roots’ Run Come Save Me where nothing else on the LP approached the magnitude of Witness. Still, good enough singles potential to merk the competition and in any case how many whole albums do you listen to on a regular basis these days anyway? Tasteful cover too.