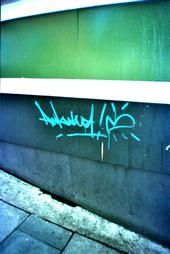 MC, DJ, producer, part time graffiti artist, member of the Vertebrae crew and organiser of the Bristol B Boy/ Girl convention, Awkward has opened for (among others) such luminaries as Roots Manuva, Prince Paul and Rahzel. His Atomic Lock LP – available for free download HERE is packed with his signature crisp rhymes and staccato electro beats and the new GrandPrize LP Not In The Same Room is in the offing with a welter of guest spots from the underground including Awol One, Rheteric and Chrome (Def Tex). In the meantime he’s been cooking up remixes for everyone from Crunc Tesla to Radiohead. Is it possible that Awkward is the busiest man in Bristol hip-hop? It occurred to the Monkey that this might be a good starting point for an interview:

Monkeyboxing (MB): Are you the busiest man in Bristol (or even UK hip-hop) and if you aren’t – who is?
Awkward (A): I feel busy but I don’t tend to notice it! Yeah I guess so, there’s a lot of busy hip hoppers in this country…get busy!
MB: There’s so much talent in Bristol on the hip-hop scene – how come it seems to keep getting passed over?
A: I’m not sure. I think it has something to do with music trends, apathy and lack of confidence. I’ve seen a lot of people get knocked back by false promises, lack of money etc. I guess it’s all about pushing yourself, the ‘industry’ is very competitive and fickle. I try to ignore all of this and make music for the fun and energy.
MB: What’s next for you?
A: Well since releasing my LP Atomic Lock (for free) I’ve been playing with a band called The Vertebrae Band with Ben One and Rogue…it’s an extension of a collective I’m a part of called Vertebrae. Aside from that I’ve been knee deep in music-making on a project under the name of Grandprize. I started it November 2007 and its 3/4 done. It features either friends of mine or people I’ve been introduced to or cold-called to ask if they could be a part. I’m very pleased with what’s made so far, there’s a few cut and paste videos I’ve put together for it as well, it’s been lots of fun. I’m just beginning to throw a few things out there on this project, mainly through U.S. based hip-hop culture blog Grandgood.com. They’ve been very supportive.
MB: Who or what is your tip for the next big thing in hip-hop – I heard you like your Korean stuff?
A Ha ha! Well,Korean b-boys anyway…they are killing it on the world stage at the moment! They just came second in the UK B-Boy Champs last week. I really like music that breaks rules and pushes boundaries. I listen to anything from Deerhoof, The Mars Volta, Why?, Parliament/Funkadelic, Busdriver, Electronic Funk, weird rock stuff, music from the Project Blowed, a lot of music from Los Angeles, lots of Bristol Bass music..ha ha..there you go, Bristol Bass!
MB: Where did you get your name – it can’t be a reference to your personality surely – with all the stuff you get up to I would have thought you’d need to be good at negotiation and compromise in some respects?
A: Well…I was called Vinyl Matt for years…from about ‘90 till 1996. I thought it was too corny and because my musical approach has always been left of centre I changed it to Awkward…I also liked how the letters rolled in a tag so that was it!
MB: I know you’re down with three of the four skills – but what about breakdancing – how’s your toprock and your downrock?
A: Weird but dope! I had to cool it 3 years back when I rolled my neck head-spinning. It messed up my mobility for a while…not a lot of fun! I was injured and had to wait for my balance to come back. I’ve been doing it for about 10 years now and am a co-founder of Bristol’s Physical Jerks crew alongside Stepchild, Wilkie, Ressia, Smurf,La and Ooze Des!
MB: The last word is yours – kick it!
A: Stop all war and change ‘the system’!