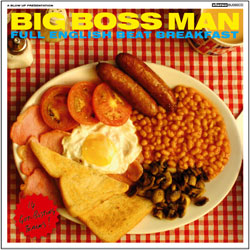 ‘Difficult third album’ my arse. What’s surprising about mod-funk legends Big Boss Man is that; given the quality of critically acclaimed LPs number one and two (Humanize (2001) and Winner (2005) respectively), and having soundtracked Mighty Boosh film-short “Sweet” and having their track Party 7 used on the 2006 Nike World Cup advert, they don’t have a higher profile in the UK and U.S. After all, here is a band that ranks with the cream of the new funk scene, by which I mean (for example) Sharon Jones & The Dap Kings and The Bamboos. And just as those two bands offer widely differing takes on deep funk, so too, do BBM. Though funk is rightly seen as a genre of black origin, it is less well-known that there were also, bizarrely, a number of white British people involved almost from the start – check out Bryan Auger, Julie Driscoll and the Trinity’s Break It Up from 1968 or Beat Me Til I’m Blue and Champ (one of the most sampled tracks in hip-hop) from Alan Hawkshaw’s band The Mohawks. And indeed, it is in the footsteps of the latter two acts that Big Boss Man follow. Their sound revolves around the interplay of the band’s three core members – organ maestro Nasser Bouzida (Hammond, Farfisa, Wurlitzer you name it – he plays it), the edgy mod guitar of Trevor Harding and Scott Milsom’s funky bass. On top of that, in the studio at least – it has always been Bouzida who has laid down the breaks.
Like its predecessors …Beat Breakfast offers up a similar top-quality brew of heavy feel-good organ-led funk grooves interspersed with forays into boogaloo and 60s rnb. There are differences this time round though. One thing you notice in particular is the way that Klaxons/ Simian Mobile Disco producer Nick Terry has got all dirty on the production – something emphasised by Bouzida’s use of a more distorted organ sound and more fuzz from guitarist Harding which combine to give the whole LP a more garage-y feel. The first five tracks pretty much cover the Big Boss Man musical spectrum and Triumph Of The Olympian is a suitably majestic opener recalling The Italian Job-era Quincey Jones big band funk in its use of horns only with a heavier, fatter beat. Beat Breakfast provides the final word in filthy distorted organ sounds in what is essentially a reworking of Booker T’s Green Onions, Black Eye (one of the few tracks with vox) goes for a breakbeat-heavy northern soul vibe and the cheekily-titled Full Brazilian (like you didn’t already guess) rocks a Latin-soul vibe. And yet some of the best tracks are still to come. C’est Moi is a massive Jacques Dutronc meets the Small Faces-style instrumental fairground ride immediately followed by, arguably, the LP highlight – Clown Face. Anyone familiar with Big Boss Man will understand how it is that ‘euphoric’ is an adjective that need not just apply to house music. Clearly single material, the huge kick and snare and organ squelches of the minimal ‘verse’ are leapt on by a chorus of soaring Hammond licks and a rousing sixties vocal hook courtesy of Bouzida. He does it so well, it’s a wonder the band don’t throw in more vocal tracks. Perhaps the best latin number is the boogaloo of Pies And Pastiche which is powered by a double-bass groove from Milsom and features both guitar and Hammond solos and then there’s the dubiously-named The Bloater – basically a super-heavy mod-rock bomb built around a driving Farfisa riff.
So, like I said – ‘difficult third album’ my arse. The only thing ‘difficult’ about this one was getting it released – it was to all intents and purposes ready to roll two years ago. Why the delay? You might as well ask why the lack of recognition? One of the albums of the year – you have been told. Don’t sleep!
Out 14 September on Blow Up Records

Posted on 7th August 2009 no comments 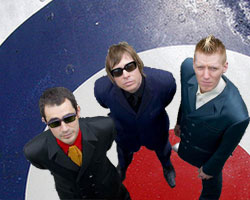 Recorded by the band at their 8-track ramshackle studio, the album was mixed by Nick Terry (Klaxons, SMD) at Studio 2 at The Premises, Hackney, London. As usual the band have made good use of their extensive collection of vintage (and temperamental) gear for Full English Beat Breakfast. Head honcho Nasser (a.k.a the Bongolian) plays mini-VIP, Farfisa and Hammond organs, Wurlitzer piano, Moog synths and drums and percussion. Driving bass beat and fuzz guitar is provided by bassman Scott Milsom “the Hawk” and guitarist Trev Harding. The band have once again created a superb spaced-out selection of prime 60’s inspired dance floor tracks: Northern Soul vibes with Black Eye, garage sounds with The Bloater, Boogaloo with Pies and Pastiche and even samba with Full Brazilian.

Big Boss Man formed in 1999 when three long time friends Nass, Trev and Scott, got together for some Hammond-heavy action. They released their album debut Humanize (Blow Up) in 2001 which precipitated a wave of interest in the band, and was a clear definition of the BBM sound: a hip Hammond hybrid of 60’s and 70’s drenched R’n’B, Funk, Latin, Jazz, Soul and Pop. The album went on to be used exclusively as the soundtrack for the 2002 BAFTA nominated short film “Sweet” featuring The Mighty Boosh (Big Boss Man performing in the nightclub sequences in the film), as well as tracks appearing on numerous compilations. Party 7 from Humanize was featured in the Thierry Henry and Eric Cantona NIKE WORLD-CUP worldwide advert in 2006 and subsequently released as a limited single. Their 2005 follow up Winner was produced by the band and Morgan Nicholls (The Streets / Muse / Gorillaz). Morgan (the son of Immediate Records’ in-house songwriter Billy Nicholls), has a studio choc-full of groovy stuff: The Who’s Hammond, Steve Marriott’s first guitar, Clavis, Wurlis etc, etc. all of which were put to good use on the album which continued the trip from where Humanize left off – through 60’s Funk, along the way taking in Bongo/Fuzz, Latin Soul, French Beat, Boogaloo and general Hammond/Moog mentalness everywhere else!

In addition to Humanize and Winner and in between their hectic live schedule, Big Boss Man have worked on numerous other projects including remixes for Paul Weller (The Bottle), a solo project from Nasser as The Bongolian (three albums The Bongolian, Blueprint, Outer Bongolia for Blow Up) on which he played all the instruments himself. Following the inclusion on the Thievery Corporation’s Outernational Soun compilation, Big Boss Man’s dancefloor favourite Sea Groove was sampled for and features throughout the track The Numbers Game on the Thievery Corporations latest album Radio Retaliation in 2008 as well as being used by the Red Cross for a nationwide campaign in the USA this year. The original 7″ version of Sea Groove now valued at £25 in the official Record Collector guide – although that’s if you can find one!

The band are loved by 60s fans, funk fans, cocktail parties and people who are not afraid to party like it is 1966 the world over.