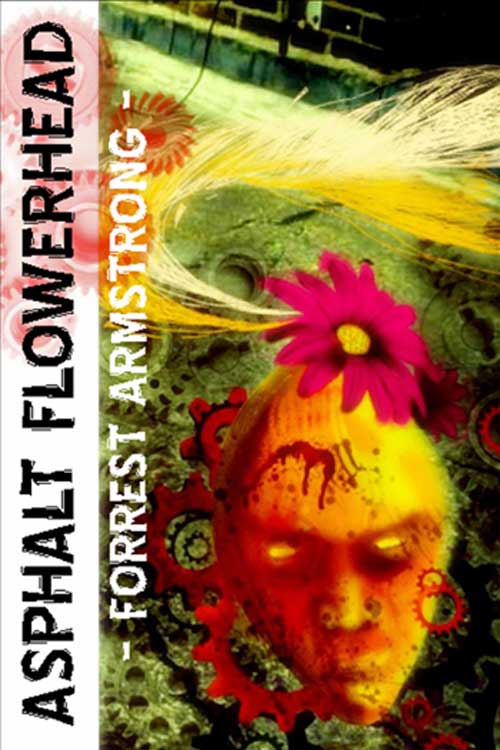 Tarmac toerag? Concrete conundrum? Forrest Armstrong’s written a book. Yeah – you remember them – not the ones you sit in front of while media whore clones babble mindless shit about other media whores – I’m on about the other ones. The ones where you have to do the work – y’know – turn pages, read the words, reflect…it’s time to get your cerebellum on yo!
(PRESS RELEASE) “The hip hop lovechild of William S. Burroughs and Salvador Dali. The language is poetic and tangled, the plot a graffiti mural of military androids, mad gurus, and ectoplasmic DJs.” (The Magazine of Bizarro Fiction)
Asphalt Flowerhead is a novel about the underground mind in America. It begins with an illegitimate nightclub getting busted by the police and follows those arrested as they try to resume their lives after jail – some through fighting back against the system or pursuit of transcendence, and some through a submission of self to drug addiction and apathy. While America fights a propaganda-war against drug traders, the streets continue to dream in the face of nightmares, and the youth grow strong to the constant symphony of junky poetics.
“It’s not like a book at all, but a combination of sci-fi outer space films and the latest video game realities that step off the page and pull you into their worlds… fasten your irreality-belt and get ready for a never-before mind-space voyage!”
(The Small Press Review)
“There aren’t many writers, apart from Milton and Dante, who have such energy and invention, and ease of execution. This novel is tremendous, virtuosic and beautiful. Forrest Armstrong has vast talent.” (Tom Bradley, author of Vital Fluid)

Buy it direct from the publisher at CrossingChaos.com