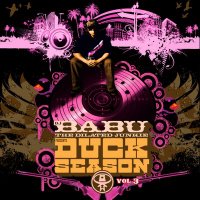 A world-famous DJ with active memberships in Dilated Peoples and Beat Junkies among his most notable accomplishments, DJ Babu has made a noteworthy evolution. The Los Angeles-based turntablist also stands as one of underground rap’s fastest-rising producers.

Waiting almost five years after the release of the previous Duck Season installments, DJ BABU has been carefully crafting the final saga in his highly acclaimed hip-hop trilogy. What started out for Babu as a DJ compilation, the Duck Season series has come full circle to become a production showcase for the legendary turntablist; not to mention, his finest work to date.

“It started out as a mixtape that featured some of my favorite tracks,” explains DJ Babu. “Now it has fully evolved into a platform of my own production. The album is still presented in the classic Beat Junkie mixtape style, but that’s just a clever way for me to disguise my LP.” Indeed, working with Dilated Peoples aided DJ Babu in his evolution as a producer. Throughout the trio’s four albums, DJ Babu was steadily gaining knowledge and insight on how to craft meaningful and memorable soundbeds. Now, he has combined his far-reaching creative abilities into one project, the rock-solid Duck Season 3.

This evolution from DJ to producer is on full display throughout DJ Babu’s sonically superior Duck Season 3. The fast-moving collection showcases all of Babu’s quickly expanding talents, from mixing, juggling, blending and scratching — as well as producing. Entirely produced by Babu, the line-up on Duck Season 3 reads like a hip-hop’s who’s who. While Babu includes many familiar faces like M.O.P., MF DOOM, Dilated Peoples and Sean Price, he also plants his ear to the streets, recruiting some of today’s hottest new talent like Bishop Lamont and Termanology.

A West Coast veteran in his own right, Babu has achieved a sound that can’t be labeled by region or style. This album could be equally appreciated in the Bronx, Compton or anywhere in between. Duck Season 3 is a treat for all the true B-Boy’s out there and a testament to the fact that hip-hop’s golden era is alive and well and as Babu concludes the vine between the golden era and today is still deeply rooted “allot of the DJs that I looked up to became great producers, from Dr. Dre to DJ Premier to Pete Rock. In a lot of ways, I’m trying to carry that same torch, where hip-hop is still rooted within DJing and records.”