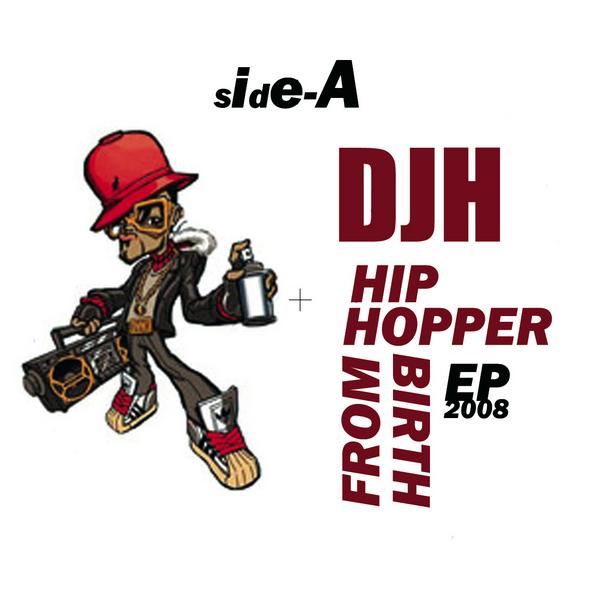 As Darren Joseph Horgan points out – having the initials D.J.H. meant it was more a case of when rather than if he would wind up as a DJ and, as it turns out, he’s been one since the early 80s – indeed since the early days of hip-hop. Regional DMC mixing finalist, winner of Radio 1’s Fresh Start To The Week, former member of the Nhamzone posse – there’s no doubt he’s in it for the props not the cash box and is a true vinyl warrior. If you want to check his skills on the lightning samplers of death you need go no further than his Hip-Hopper From Birth EP. It’s an instrumental four-tracker packed with samples culled from esoteric sources and fat funk breaks and the fact that it’s downloadable in high quality 320 kbps mp3 on this site is a monkeyboxing.com exclusive! The EP is flames throughout but two tracks stand out in particular: Interstellar Hip-Hop (Download here) – a tripped-out groove centred around the sort of farty old-school synth bass used by the Dust Brothers on the Beasties’ Shake Your Rump and Hip-Hopper From Birth (Download here) – an in-your-face breaks-fest featuring some pyrotechnical scratching that will have you reaching for your beanie, Pumas and a mat. Plus, of course, there’s If Only We Had Ears (Download here) and Listen To The Beat (Download here). Have a read of what happened when D.J.H. caught up with the Monkey:

Monkeyboxing (MB): Exactly how long have you been rocking the wheels of steel?
D.J.H: Well I don’t really wanna give me age away but it’s over 23 years since I got my first pair of 1210’s on HP while still at school! I remember going to get a pair of silver 1200’s because that was the only colour there was at the time and the bloke in the shop said he had just got the first batch of black 1210’s in the country and to come in. So I took those away and never looked back and they are still running strong to this day.
MB: Who do you admire most in the worlds of turntablism and production?
D.J.H: My God that’s really impossible to answer as there’s so many great artists out there and I listen to a wide range of music but I will name a few. As for DJ’S – the main ones that were my era were Cash Money, Jazzy Jeff, and D.J.Cheese. When Cash Money brought out Scratchin’ to the Funk it blew me away. Jazzy Jeff on A Touch Of Jazz that record was ahead of its time and D.J.Cheese with King Kut – awesome! Also Marley Marl for his pioneering production on countless hip hop records,,,The Bomb Squad!!! Rick Rubin, Pete Rock,,,Large Pro – and that’s only the tip of the old-school/ mid-school iceberg.. Love D.J Format’s tracks, he’s got the breaks for sure, also F.S.O.L. – I love their production – the ISDN album is incredible…I love Radiohead – now their production is wicked. Also Qbert – that man is from another planet what a DJ,,,the list could go on and on….
MB: The EP is quality – have you thought about working with any MCs recently?
D.J.H: Thanks for that I’m glad you like it. To be truly honest not really, I’m not in any real contact with any MC’s. I have a lot of very good beat-making friends (ha-ha!) some who do start rapping after a few beers and the local herb. We are always hitting each other with demos and ideas for feedback on tracks, I have a lot of vocal samples in my tracks which are all taken from vinyl which I gather up on my digging trips so they’re my MC’S in a way. Really there’s always a message in there somewhere but that’s not to say it won’t happen because you never know what’s around the corner.
MB: If you could work with any MC you liked – who would it be and why?
D.J.H: It would have to be Rakim,.,that man’s flow is to die for…follow the Leader!
MB: Haha – yeah can’t disagree with that! Tell us about the new website breaksthehabit.com?
D.J.H: Yeah been really slow on this as web stuff is not really my bag. I just spend my time doing beats and working on production skills – but it will be ready for Jan. 09 hopefully. I will be uploading lots of tracks for download, also instrumentals for MCs to rhyme over and send back to me with their rhymes on and then post the best couple on the site. I have a lot of ideas but don’t wanna give too much away but you will be the first to know when it’s ready – getting my finger out on this one for sure!!!
MB: I heard you practice Chinese Boxing – what kind? And is it a match for Monkey style?
D.J.H: Ahh yes! it could be! I have practiced Tiger style and Crane,,,and Chinese kickboxing. It’s really good for keeping your SP1200 beats healthy!
MB: Glad to hear it – the last word is yours though – anything you want to say?
D.J.H: Just to say I still have some 12″ EP’s left and they are free! You just need to pay the postage. I have converted the mastered DATS from the EP studio session to mp3 for download as the tracks you hear on the myspace page are unmastered so they will be available soon…..but also keep supporting vinyl it must never die! Peace out..DJH

Posted on 14th November 2008 no comments

2. (NEW) K Delight & The Voodoo Guru feat. Chrome – The Wildstyle Dream (Playing Around)
Does what it says on the tin. One for breakers everywhere: Part 1
Listen

5. (1) The New Mastersounds – All We Can Do – Plug & Play LP (One Note)
Ultra itchy break, squelchy wah-wah and bass like an eel hitting the side of a dustbin.
Listen

6. (3) Betty Moorer – It’s My Thing – Diggin’ In The BGP Vaults LP (BGP)
Funky soul is the sexiest music ever. Betty Moorer tells it like it is.
ListenRead Review…

9. (NEW) Que Billah feat. The Cool Kids – Colours (Unreleased)
Billah got the beats: The Kids got the rhymes. And ‘sneakers’. In lots of colours. Word.
Listen