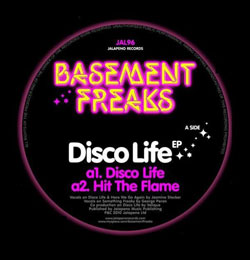 Big G’s back and he’s used the ‘D’ word! Despite this, the EP’s not as disco as you might fear. Then again, if you actually like disco, it might not be as disco as you hope. Life’s a funny old game.
(PRESS RELEASE) Basement Freaks is actually Greece’s George Fotiadis, who presents four tracks well-endowed in the funk department. The title cut sets up a solid boogie synth-line for 90s-style filtered disco action with cool vocals from Jazzmin and George Perins. Three more tracks – old school JB funk of ’Hit The Flame’, ’Here We Go Again’ and ’Something Freaky’ – keep the party spirit simmering making for another red hot pepper for this esteemed label.
(Released 22 Feb on Jalapeno)